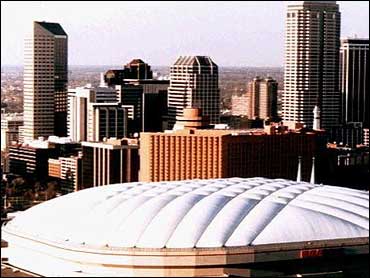 The FBI has issued a "very vague" alert warning that people with suspected ties to terrorist groups have used the Internet to access information on stadiums in the United States and Europe.

FBI officials say images of the RCA Dome in Indianapolis and the Edward Jones Dome in St. Louis were downloaded from WorldStadiums.com, a Web site with information about sports venues around the world.

"The worst thing we can do is buckle under terrorism. That's what (terrorists) want us to do, thinking they can disrupt our lives," said Eubanks. "But certainly we should have caution and awareness."

The FBI issued an intelligence bulletin to law enforcement agencies nationwide in recent days. The agency said it has contacted authorities in both places about security precautions.

Doug Garrison of the FBI's Indianapolis office said there is no indication of a credible threat at any particular location or date.

Neither stadium has any events scheduled for the Independence Day holiday.

Bruce Sommer, director of the America's Center convention complex that includes the Edward Jones Dome, said he learned of the FBI memo Monday from the NFL. Since then, he said, the complex's security workers and other employees have been told "to be terribly vigilant about what they see and who they see," reporting anything suspicious.

"Generally, that's about all we can do," Sommer said. "That's (standard procedure) from now on, and that's the way it will always be."

Without elaborating, Sommer said the complex's security already had been enhanced since the Sept. 11 terrorist attacks.

"There's no reason for anyone to alter how they do business with us or attend events," he said. In conveying the FBI memo, he added, "officials have been clear that it was not a threat, not even a perceived or implied threat."

"There's no reason to believe anything is going to happen to this facility," he said.

Police Chief Joe Mokwa said he did not view the FBI memo as "an imminent threat," but only as "one aspect of a myriad of clues that we are provided almost daily."

"It's noteworthy and needs to be attended to, but it's nothing that should prevent the people of St. Louis from attending events at the dome. We have to put it in perspective," Mokwa said.

In post-Sept. 11 America, he added, "it's an unfortunate set of circumstances that our country and community always are going to be deluged with portions of information like this."