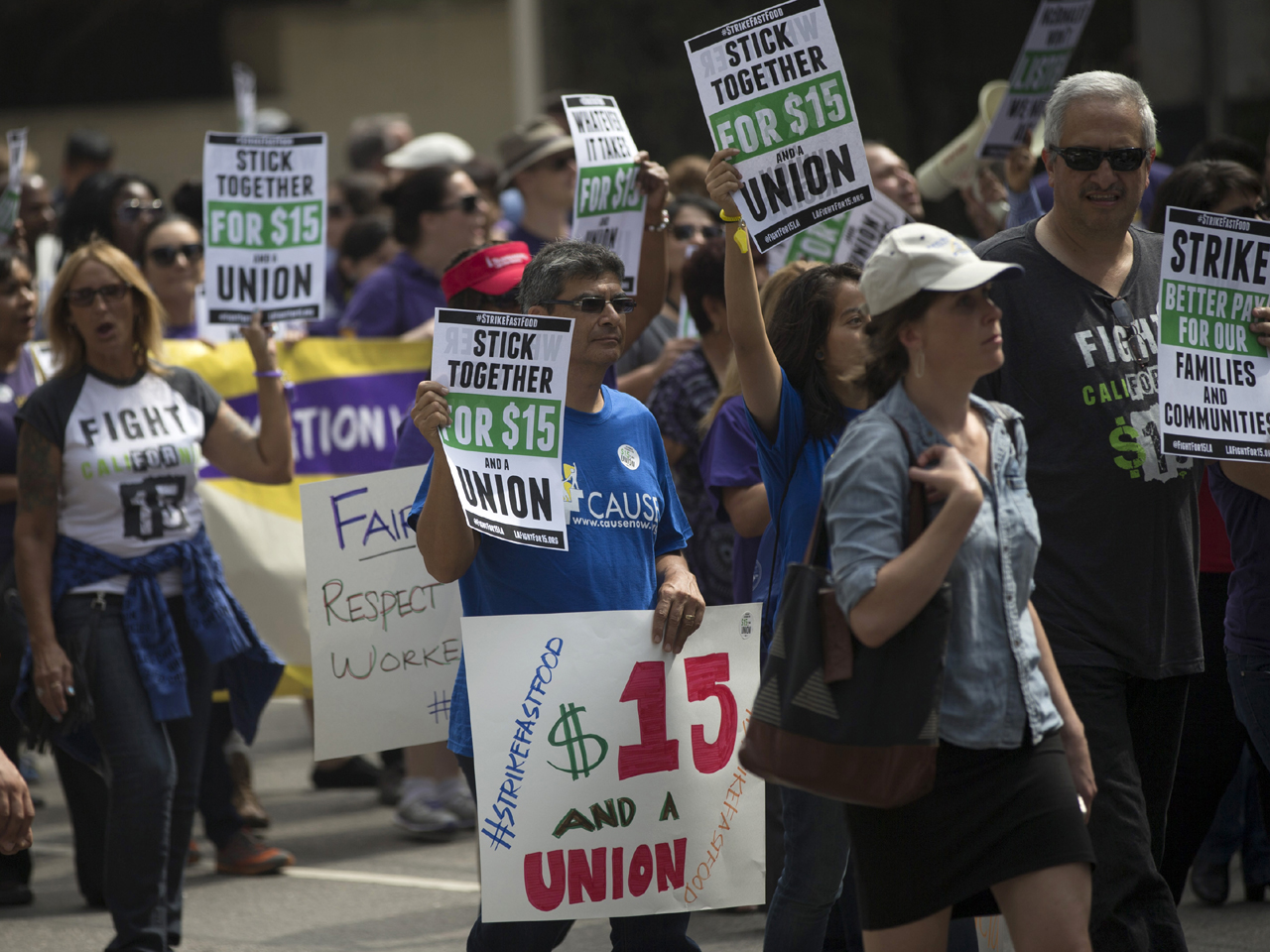 Yesterday's protests by fast-food workers in more than 100 U.S. cities weren't just an effort to raise the minimum wage to $15 an hour. They were also a demonstration of a tactic re-invigorating organized labor: Showing unions as fighting for all workers, not just their members.

Hundreds of people were arrested Thursday for non-violent civil disobedience during a series of strikes in 150 cities across the U.S. over low wages at fast-food companies including McDonald's, Wendy's, Burger King and KFC. Although the effort was funded and organized by the Service Employees International Union, most of the protesters were not members of the SEIU or any other union.

Kendall Fells, a representative of SEIU and organizing director of Fast Food Forward which sponsored yesterday's protests, believes that it's common cause, not membership, that makes a union.

"The definition of a union is simply workers standing together for common change," said Fells. "That's exactly what these workers are doing and that's why they're so successful. The way you have a union is by acting like one."

This is just the latest effort, mostly by newer and smaller unions, to organize people in low-paying, high-turnover jobs that older, more established unions believed couldn't be organized.

"Unions have to focus on low-wage workers," said Stuart Applebaum, president of the Retail, Wholesale, and Department Store Union. "Those are the people bearing the brunt of economic policies and who have lost most. Unfortunately that is also where much of the work is these days."

One thing SEIU has done is to organize low-wage workers by industry instead of the traditional model of organizing relatively well-paid jobs at individual businesses. It is a tactic that has worked well for the union, which today has 2 million members mostly working in health care, property services and government. Since the 1980s it has successfully organized janitors, security guards, child care providers and others.

But organizing in this case doesn't just mean increasing the number of union members, according to Ross Eisenbrey, vice president of the Economic Policy Institute, a liberal think-tank in Washington, D.C.

"They aren't trying to organize it in traditional sense of getting collective bargaining in McDonald's and the other fast-food places," he said. "They're doing something different, which is to create a movement to have low-wage workers demand more in pay and better conditions, and that will then carry over to the people they are over to organize."

This "rising tide lifts all ships" approach is a conscious effort to change how the public views unions and what they do. Under the old model of organizing one business at a time, it was easier for companies to make the argument that this was just another case of unions trying to get in and make money for themselves. This isolated the unions from the community as a whole.

The new model of campaigns positions labor as just one part of a broader coalition within a community, said Héctor Figueroa, president of SEIU local 32BJ.

"We should make our campaigns be about what the issue is," he said. "We should put forward that workers are underpaid, working under unsafe conditions, without opportunities and making a general demand regardless of employers that the whole industry needs to take notice and needs to address these concerns."

This change in focus is resonating with Americans, union members say. Figueroa points to Seattle's recent decision to raise the minimum wage to $15 an hour, as well as moves by other U.S. cities pushing to raise baseline wages well above the federally mandated $7.25 an hour, as signs that Americans support labor's demands.

"What has changed is not only the tactics but also the reciprocity and the scale of attention by the public to this kind of campaigns," he said. "If there had not been the recognition that these people work hard and they deserve better, it would have been very hard to get to where we are now. It's the right tactic at the right moment to say at the national level that these workers deserve better."

The moment may also be right because many people have a different view of their place in the American economy than before the financial meltdown.

"What happened with the Great Recession is people began to understand that they should be questioning the economic underpinnings of our society," said Applebaum. "People are more skeptical now of corporate leaders after they saw what happened. They've seen how benefits they took for granted all their lives are disappearing. They lost so much from where they thought they should be that they're willing to stand up."

The unions are also benefiting from other economic factors, like the fact that average wages for most Americans haven't gone up in years and the replacement of pension plans with savings vehicles like 401(k) plans, which were never designed to serve as retirement plans.

Still, unions have a long way to go before reclaiming the popularity they enjoyed from the 1930s to the 1970s. For now, organized labor would likely be happy with a widespread increase in the minimum wage, something that may not be out of reach.

"The odds are certainly getting better, and part of the reason is the political climate has changed so that now it's not even considered radical to be thinking about a $15 minimum wage," said EPI's Eisenbrey. "It's changing the landscape and making what seemed extreme or far-fetched a year or two ago now seem completely plausible."