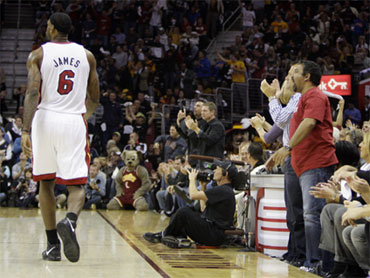 This column CBSSports.com. It was written by Ken Berger.

This was a night to overwhelm the senses, and to expose myths. Perception and reality collided Thursday night, and the force of it all seemed to be gathering every gallon of water in Lake Erie and threatening to drown us.

It would've been what we deserved. All of us, for believing the myth -- and perpetuating it -- that professional athletes are playing for us. For our cities, our towns, our families or communities.

They're not. They're playing, above all else, for themselves. And that's OK, as long as you accept it. It's just that Cleveland, a city with stronger make-believe relationships with its athletes than most, was forced to learn this lesson in a harsh and painfully direct way. And at its core, this is the reason the fans here were so stunned by LeBron James' insolent departure -- and on the flip side, why James has been so unable to comprehend their pain.

James still didn't get it as he stood outside the visiting locker room at Quicken Loans Arena, after needing only three quarters to drop 38 points on his former team in the Miami Heat's 118-90 removal of Cleveland's still-beating heart. The perspiration not yet dry, James was asked what's next -- where he goes from here.

"Just to continue [the] greatness for myself here in Miami," James said.

Never has the disconnect between athlete and fan been wider, and nowhere is that chasm more pronounced than in Cleveland, a city whose very identity -- at least in the context of competitive games played by highly paid professionals -- is defined by sports disappointment. That venom spilled over Thursday night, at the very intersection of what we thought we knew about sports and what sports really is.

"It's nothing personal," James said. "It's a basketball game."

Read those words again and let them sink in. It's nothing personal for the athletes, nor should it be, on many levels. It is personal for you -- for us, for sports fans. We convince ourselves that it is, but it isn't.

"There's nothing personal from myself to these fans," James said. "There won't be, ever. Like I said, it was seven great years. There's a lot of memories that I have here and I have the utmost respect for these fans because they came out every night that I was here and supported us. And all we tried to do as players was give them back that same energy they gave us."

That's it. Give the energy back. Not stay here for life; not care about you the way you've convinced yourselves you care about him.
"Like I said, I understand their frustration," James said. "I understand things could've been a little bit different this summer from both sides. But I'm moving on. And I'm happy to be in the position I'm in."

In that emotion Thursday night, LeBron was alone -- one man facing the brunt of 20,000 voices.

The boos, the a-hole chants, the garden-variety derision -- that was all fine, and tastefully done by sports arena standards. The "Akron hates you!" chants deserved a nod for creativity, and the Quitness signs and WWMJD (What Would Michael Jordan Do) placards were all good for a laugh.

Then, as Heat coach Erik Spoelstra predicted -- not a fan, not a player, just a guy who watches film and draws up plays -- something happened.

"When the smoke clears," Spoelstra had said before the game, "it'll become what it always is. A basketball game."

And a lopsided one, at that. The Heat went up by 25, and then 30, and then 38. James -- portrayed as the estranged son of thousands, but really, at his core, just a basketball player -- preened and trash-talked his way to an assortment of demoralizing jumpers, and-ones, and drives to the basket. In the homecoming narrative, James was doing this to regular people who walk the streets and get up in the morning to earn their paychecks. But really, he was just doing it to Antawn Jamison, Anderson Varejao, Mo Williams and Boobie Gibson.

Sure, LeBron made a point of hanging around in front of the Cavs' bench every chance he got, yammering with his former teammates and absorbing up-close hatred from his former fans. At one point, Varejao had fun with him, swiping his headband right off his dome. James motioned to the Heat bench for another before draining a jumper and converting a three-point play that gave him 30 points on his way to a 24-point third quarter and extended Miami's lead to 88-50. And that's when things began turning ugly in the building -- when the hatred and fundamental misunderstanding over what happened in July got raw and angry.

There were numerous skirmishes in the stands -- four arrests, one ejection -- and at least one battery lobbed onto the court near the Heat bench. Why? Because fans instinctively believe these things are being done to them. The same way they believed James was doing all of this for them for seven years.

Byron Scott's Cavs -- or, what's left of them after LeBron -- couldn't play for the city any more than LeBron did. It is the raw beauty of professional sports; it is every man for himself. In the NBA, the survival instinct is magnified because there are only five players on the floor; the stars are bigger, the lights brighter, and the balance of power more tilted than the working stiffs paying hundreds of dollars for these tickets realize.

Nowhere is this shell game more gripping than Cleveland, where by definition, there are always better days ahead. For a city whose teams haven't won a pro sports championship since 1964, there have to be.

But it cuts both ways. The Heat tried to claim this as some sort of team-building, toughness-forging accomplishment. They kept calling themselves a "family," referring to LeBron and another former Cav, Zydrunas Ilgauskas, as their "brothers." This is just as misguided as thinking that LeBron would be employed by a Cleveland sports team forever.

"I don't have any hurt feelings or hard feelings about this game at all from these fans," James said. "I wish them the best."

And there was that chasm, that disconnect, perfectly described. It is why LeBron and his fans -- his hometown -- still don't really understand each other, and never understood each other as well as the fans thought. That, and the simple fact that LeBron again refused to apologize for the part of this that was his fault: the obnoxious way he left, on national TV, failing to understand that fans don't think like athletes.

"Do I regret what I did?" James said. "I never regret any decisions that I make. ... If you make a mistake, or if you feel like you made a mistake, then you just learn the next time. There's nothing you can do. It's not a clock that we can turn back and do it all over again. Life doesn't work like that. My intentions were on point. Maybe the execution just was a little off."

And as he walked out of the building -- five minutes before midnight, wearing black and playing the role of villain -- James finally found some welcoming territory. He worked here for seven years, and made some friends.

One woman in a side room, organizing the night crew to clean up after the biggest game that will be played here this season, shouted down the hallway, "Hey, LeBron!"

"Hey, sweetie, how are you?" he shot back with a smile.