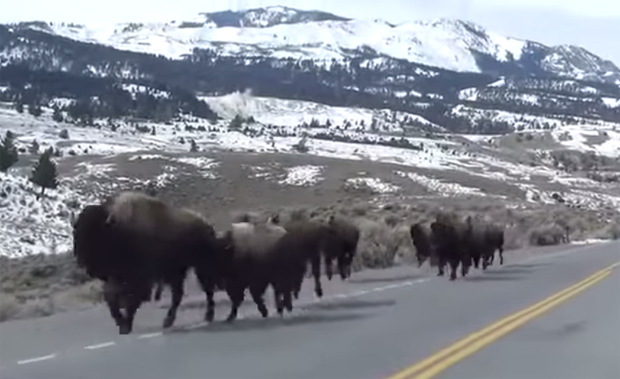 Bison were seen stampeding through Yellowstone National Park days before the March 30 earthquake, jumpstarting a theory that perhaps the animals had predicted it and were fleeing for their lives.

The earthquake, which occurred at 6:34 a.m. local time, recorded a magnitude of 4.8 -- relatively light by seismic standards, but still the strongest the park had seen in over 30 years. It was centered in the northwest corner of the park, according to the University of Utah. Yellowstone experiences an average of 1,600 smaller earthquakes each year.

The park also sits atop a "supervolcano" -- a chamber of molten magma deep beneath the surface that scientists believe has erupted three times in the last 2.1 million years.

A popular video, titled "ALERT! Yellowstone Buffalo Running for Their Lives," had appeared on YouTube some ten days before the earthquake, prompting some users to wonder whether the bison knew something that humans didn't.

Yellowstone Park officials immediately disputed that theory, telling Reuters that the video actually shows bison galloping into the park -- not out of it.

The Los Angeles Times reported that video of the bison was originally posted on the personal Facebook page of Leo Leckie, a sales associate of the nonprofit Yellowstone Association, who told the newspaper that he had filmed and posted the video March 14 under a completely different title: "Yellowstone bison on the run for the joy of Spring."

Misinformation about the supposed stampede was apparently added when someone reposted it to YouTube.

"Eruptionists and conspiracists pirated the video and misrepresented it, suggesting that it was shot after the earthquakes," Leckie told the LA Times. "Then news agency after news agency started picking up on it, without looking at the original video to see what my actual intent was."


Still, so many people believed the false rumors that Yellowstone officials tried to dispel it with a video of their own.

Al Nash, a spokesman for Yellowstone National Park, noted that the animals have been migrating back to the park -- after spending all winter in the lower elevations, looking for food.

"We get some pretty wild rumors out here," Nash said in the video. "We have seen no signs to suggest that the Yellowstone volcano is about to erupt."

Furthermore, a three-year study by scientists from the University Duisburg-Essen in Germany may show that redwood ants -- not bison -- might be a better predictor of earthquakes.

Using cameras, researchers Gabriele Berberich and Ulrich Schreiber found that red ants went about their daily activities each day. However, before an earthquake larger than a magnitude of 2.0 began, the aunts were awake at night -- scurrying about and vulnerable to predators.

When asked why, Berberich told reporters that she suspected that the insects can pick up changing gas emissions or local shifts in the Earth's magnetic field, according to LiveScience.