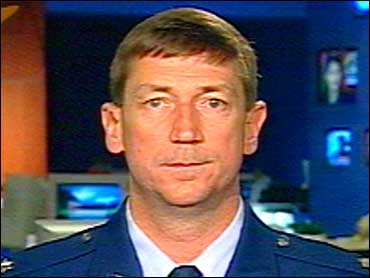 While Iraqi officials have said that the U.S. soldiers being held prisoner will not be harmed, their fate still remains unclear.

One sign of hope for their families is the release at war's end of many of those captured by Iraq during the first Gulf war in 1991.

"I remember the first few days I was in prison," says Desert Storm veteran Capt. Dale Storr, who was captured by Iraqi soldiers and spent 31 days as a prisoner of war. "A lot of shock, a lot of fear. But after a while you tend to adjust to it. But you never get used to it."

Army Spec. Melissa Rathman Coleman, who spent 33 days in captivity before her release, says she was treated very well, possibly because she is a woman.

"I'm not sure if it was that specific group of people that held me or if it was a nationwide thing," she said. "They treated me very, very well. They checked on me after every air raid, make sure I was OK. I thought that's how everybody else was getting treated also," she said.

It wasn't until later than she realized others did not have the same fate.

Capt. Storr says his lowest point came during a particular interrogation by the Iraqis.

"In the first three days I was there, I had become sick, and I was handcuffed and blindfolded. They had dislocated my shoulder and broken my nose, broken my left eardrum. I was on the ground and I was hoping that they were going to kill me. I was kind of wishing it would all be over. But that's about as low as I got," he remembers.

He is grateful for the training he received at a survival school at Fairchild Air Force Base. "It teaches you escape-and-evasion techniques as well as resistance techniques - things to help you in those interrogations. And it was very helpful. It was the best training in the world, and I don't think I could have survived without it. I found it very useful in helping me resist the Iraqi interrogators," he says.

CBS News veteran Correspondent Bob Simon who was captured around that same time, says the method of interrogation was intense and immediate.

He remembers, "In 1991, it wasn't just the four of us from CBS News who were taken prisoner, but several, more than 20 American POWs, and British and French, as well. The Americans were mainly pilots. And, of course, the Iraqis interrogated them not only brutally, which is their method of interrogation, but very intensely and immediately, because they wanted real-time information. The thing to bear in mind, though, is that we all got out alive."

Coleman is praying for the families of the POWs now captured. She is also from Texas and offers her support through her own group who was captured in the first Gulf war. "We formed a group called the 5th allied POW Squadron. There's a Web site you all can check out. We try to be of support to the families and offer our home addresses, phone numbers, things of that sort," she says.

Capt. Storr's message to the families of the POWs is to keep the hope alive.

"Don't give up hope. We've seen them on TV. We're going to hold the Iraqis responsible, and we will get them home. They know that and I hope their families know that; that we're going to get them back."