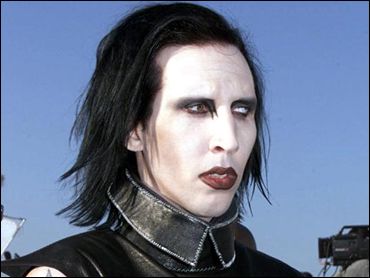 Marilyn Manson's former keyboardist has sued the shock rocker, claiming he kept millions of dollars meant to be shared and bought items including a handbag owned by Hitler's girlfriend and a skeleton in a wheelchair.

Stephen Bier — whose stage name was Madonna Wayne Gacy — says he, Manson and other band members signed a partnership agreement in 1993 to share profits.

Bier says he began to think differently several years ago when Manson, whose real name is Brian Warner, went on a spending binge. He claims Manson owes him at least $20 million in shared profits.

From 2004 to 2006, the suit claims, Manson used band money to buy a $2 million home, collect Nazi paraphernalia and to give his fiancée at the time a handbag once owned by Eva Braun.

In addition, the suit claims Manson spent band money on personal drug treatment, a low-budget movie production, a Los Angeles gallery to display his artwork and about $450,000 for an engagement ring and his wedding to burlesque performer Dita Von Teese. She has since filed for divorce.

Bier contends that Manson and the band's lawyer and business managers cut off his salary payments and band credit card access and refused to pay his medical bills for work-related problems.

Manson's agent did not immediately return a call Saturday. But in an interview Thursday with MTV News, Manson denied the allegations and said he would fight them.

"The fact that he's claiming that I've treated him unfairly, financially, is really ridiculous," the singer said. "And I would never spend my money on a Chinese girl skeleton. That would be crossing the line. It's a Chinese boy, for the record."