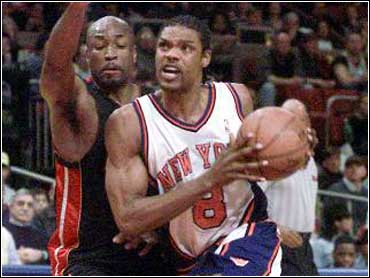 Patrick Ewing sat at his locker a little longer than usual Sunday, trying to convince everybody that this performance wasn't out of the ordinary.

"Nothing different," he said with a straight face.

In truth, a lot was different.

Playing with a perfect mix of raw talent and enthusiasm a combination that often had been missing from his repertoire this season Ewing scored a season-high 25 points and grabbed 14 rebounds while outplaying Miami's Alonzo Mourning as the New York Knicks defeated the Heat 94-80.

"I chuckle at the way he's been measured," Miami coach Pat Riley said of Ewing, whose game is rounding back into form after missing the first 20 games recovering from a partially torn Achilles' tendon. "You only have to coach a guy like Patrick to know what kind of heart he has. I think he's just beginning to show it."

The victory, which snapped Miami's three-game winning streak and moved the Knicks within a half-game of the Heat in the Atlantic Division, came with a price for New York as forwards Marcus Camby and Larry Johnson went down with injuries.

Camby partially tore the anterior cruciate ligament in his right knee when he was flagrantly fouled by P.J. Brown, and Johnson chipped a bone in his left foot. Camby will miss Monday night's game at Charlotte, staying in New York for further examination. Johnson's status was listed as day-to-day.

There was no estimate from the Knicks on how long Camby will be sidelined.

Perhaps most impressive for New York was the way the team responded after Van Gundy screamed and ranted at them as they came off the court for a timeout trailing by 15 points early in the second quarter.

"That was one of the worst I've ever seen," forward Kurt Thomas said.

By the midpoint of the third quarter, the Knicks had caught up. And after that, they steadily pulled away to hand Miami one of its most lopsided losses of the season.

Ewing, coming off a season-high 20-point performance against Portland on Thursday night, was 10-for-19 from the field in a season-high 44 minutes and helped hold Mourning to 5-for-13. Mourning finished with 12 points and five rebounds after being hampered by foul trouble throughout the game.

"I didn't do anything to counter his game," Mourning said.

Tim Hardaway, who made nine of his first 10 shots, led Miami with 23 points.

Camby landed awkwardly on his knee after being fouled from behind by Brown on a fast break with 6:28 left and the Knicks leading 74-69. Camby didn't get up for several minutes before finally limping off.

Despite losing another forward to an injury Johnson went out late in the first quarter the Knicks didn't have a letdown. Chris Dudley made one of two free throws and Ewing hit a tough shot while driving to his left.

Mourning then missed a jumper, Sprewell hit two foul shots, Ewing rejected a shot by Hardaway and Sprewell converted a fast-break layup on a pass from Houston, making it 81-69.

It was the fourth straight victory for New York against an opponent that entered the game with a superior record.

The Heat were ahead 30-15 when Van Gundy lit into his team, screaming at them during a 20-second timeout.

Whatever the coach said brought the desired effect as the Knicks came back with a 14-3 run to pull within four points. New York couldn't quite catch Miami before halftime, though, and the Heat took a 45-39 lead into the locker room behind 17 points from Hardaway on 7-for-8 shooting.

The Knicks took their first lead of the game midway through the third period with a run spurred by Ward. He had a steal and fast-break reverse layup, cutting Miami's lead to 55-54, then came up with another steal leading to two fre throws by Sprewell, putting the Knicks up 56-55.

Sprewell had a breakaway tomahawk dunk with 1:13 left in the third, helping the Knicks to a 67-63 lead entering the fourth, and Miami eventually fell behind by as many as 14.