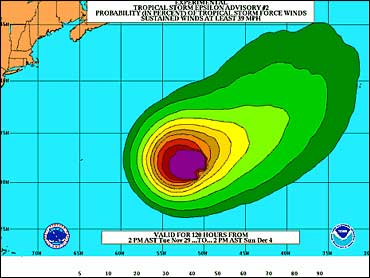 Tropical Storm Epsilon formed Tuesday in the central Atlantic, where it was a threat only to shipping, forecasters said.

The 26th named storm of the busiest Atlantic hurricane season on record was expected to be absorbed by other weather systems and shouldn't affect land, said Jennifer Pralgo, a meteorologist at the National Hurricane Center in Miami.

At 10 a.m. EST, Epsilon had top sustained winds of about 45 mph. It was centered about 845 miles east of Bermuda and about 1,395 miles west of the Azores Islands. It was moving west near 8 mph and was expected to continue that movement for at least 24 hours.

The six-month Atlantic hurricane season officially ends Wednesday, but forecasters warn that tropical storms and hurricanes can develop in December, but no hurricane has been known to hit the United States between December and May.

A red state goes green: How Texas became a pioneer in wind energy

Last year, Tropical Storm Otto formed on the last day of the season, Nov. 30, and lasted until Dec. 3. In 2003, two storms, Odette and Peter, formed in December.

According to the National Hurricane Center, the latest hurricane to strike the U.S. was on Nov. 30, 1925, near Tampa.

The relief that comes with the end of the season may not last very long: Forecasters say 2006 could be another brutal year, because the Atlantic is in a period of frenzied hurricane activity that began in 1995 and could last at least another decade.

Government hurricane experts say the increase is due to a natural cycle of higher sea temperatures, lower wind shear and other factors, though some scientists blame global warming.

The 2005 season obliterated many long-standing records:

In 154 years of record-keeping, this year had the most named storms (26, including Tropical Storm Epsilon, which formed Tuesday), the most hurricanes (13), the highest number of major hurricanes hitting the U.S. (4), and the most top-scale Category 5 hurricanes (3).

Total insured losses from hurricanes this year were put at $47.2 billion, above the previous record of $22.9 billion set last year when four hurricanes also hit the U.S., according to risk-analysis firm ISO.

Wilma was briefly the most intense Atlantic hurricane on record in terms of minimum central pressure (882 millibars). It also was the fastest-strengthening storm on record — its top sustained winds increased 105 mph in 24 hours in the Caribbean.

Forecasters exhausted their list of 21 proper names (Arlene, Bret, Cindy and so on) and had to use the Greek alphabet to name storms for the first time.

The worst damage, of course, was inflicted by Katrina. Miles of coastal Mississippi towns such as Waveland and Gulfport were smashed. Eighty percent of New Orleans was under water after its levees broke. The world saw families stranded on roofs and hungry and thirsty refugees stuck in the Superdome and Convention Center. Bodies lay on streets for days or floated in the fetid floodwaters. Hundreds of thousands of people have yet to return to their homes — or have no homes to return to.

So far, Congress has approved $62 billion in mostly short-term relief aid, and estimates put the cost of rebuilding at up to $200 billion.