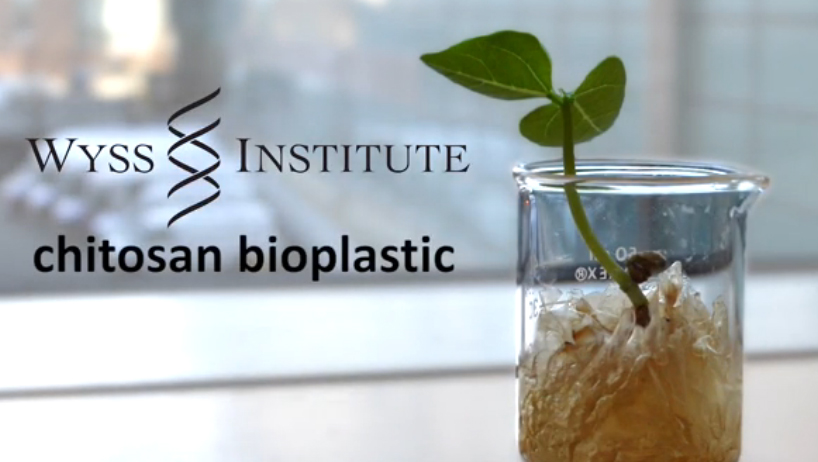 Over 300 million tons of plastic is produced annually, and only about 3 percent of it gets recycled. The rest is simply trashed, taking centuries to degrade, or left adrift in the ocean. An estimated 24,000 tons of plastics are ingested by fish in the North Pacific alone each year.

Bioplastics -- a so-called "green" alternative to regular plastic -- contain some form of plant-based materials, but often do not degrade fully in landfills. Researchers at Harvard's Wyss Institute for Biologically Inspired Engineering may have solved that problem, with a new bioplastic made from shrimp shells that they say is fully degradable.

Made from chitosan, a form of chitin -- the main ingredient found in the shells of crustaceans, insects and the wings of butterflies -- it is one of the most abundant organic materials on Earth. The majority of the world's available chitin comes from discarded shrimp shells, which are also sometimes used in fertilizers, cosmetics or dietary supplements.

"Copepods alone (small crustaceans in the zooplankton [family]) produce a billion tons of chitin per year," researcher Javier Fernandez told CBS News in an email. "In other words, in the last twelve month they have produced the same amount of chitin than all the plastic we have produced since 2009."

Led by Fernandez and Dr. Don Ingber, the founding director of the Wyss Institute, researchers developed a way to process the material and manufactured large, three-dimensional objects that can biodegrade quickly when exposed to the environment, especially in the presence of moist soil and the right organisms. They say it could eventually be used to manufacture plastic bags, packaging and even biodegradable diapers.

When compared to petroleum-based plastics, the chitosan material is not naturally waterproof, requiring a coating of beeswax to create a water barrier, Fernandez says.

Created by the team two years ago, it represents the next iteration of a material called "shrilk." Originally composed of chitin from shrimp shells, plus a protein from silk, they ditched the silk to find a cheaper, easy-to-make bioplastic that could be widely manufactured.

"Shrilk is a very complex materials fabricated with in very specialized environments...which requires a great control of the material at micrometric level. Also the fibroin (the protein form silk we were using) is much more expensive and difficult to extract than the chitosan," Fernandez explained.

Advantages of using the chitosan-based material for plastic production is not limited to its abundance and biodegradability, but also the ease of manufacturing, which also has little environmental impact, unlike conventional plastics. Fernandez notes that chitosan has been produced with only water and acetic acid in concentration under one percent -- nearly one-fifth of the concentration of vinegar. Studies have shown show that water can accumulate pollutants commonly found in plastics, such as BPA -- as well as tiny bits of plastic, or microbeads.

"There is an urgent need in many industries for sustainable materials that can be mass produced," Dr. Ingber said in a March press release. "Our scalable manufacturing method shows that chitosan, which is readily available and inexpensive, can serve as a viable bioplastic that could potentially be used instead of conventional plastics for numerous industrial applications."

Current technologies, such as casting and injection molding, can be used to manufacture this type of bioplastic. However, some modifications would be required. These materials will also require some rethinking of "our ideas and ways of working, which have been developing and growing around synthetic polymers," says Fernandez.