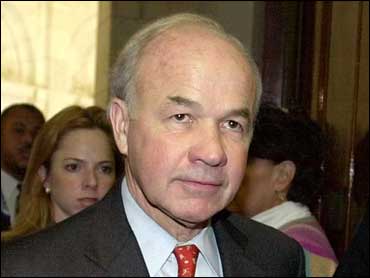 Enron Corp. founder Kenneth Lay, who faced decades in prison for one of the most sprawling business frauds in U.S. history, died Wednesday while vacationing in Aspen, Colo. He was 64.

Lay died of coronary artery disease, according to Mesa County Coroner Robert Kurtzman, who added that there was evidence Lay had a previous heart attack.

The Pitkin, Colo., Sheriff's Department said they were called to Lay's house in Old Snowmass, Colo., shortly after 1 a.m. He was taken to Aspen Valley Hospital, where he was pronounced dead at 3:11 a.m. Lay, who lived in Houston, frequently vacationed in Colorado.

Lay ascended from near-poverty as a minister's son in Missouri to the pinnacle of corporate America. He was considered a visionary who had President Bush's ear during Enron's halcyon days, but his reputation and monumental wealth shattered with that of his company.

"I guess when you're facing the rest of your life in jail and in your heart you know you're an innocent man, I guess it's too much to bear," said close friend Willie Alexander.

Lay and former Enron executive Jeffery Skilling were convicted of conspiracy and securities and wire fraud on May 25. The verdict put the blame for the 2001 demise of the high-profile energy trader, once the nation's seventh-largest company, squarely on its top two executives.

Lay was also convicted of bank fraud and making false statements to banks in a separate, non-jury trial related to Lay's personal finances. All along, Lay insisted there was no fraud at Enron, Smith reports. But a jury wasn't convinced.

Family spokeswoman Kelly L. Kimberly issued a statement saying, "Ken Lay passed away early this morning in Aspen. The Lays have a very large family with whom they need to communicate. And out of respect for the family, we will release further details at a later time."

Wende said Lay and his wife, Linda, were in Colorado for the week "and his death was totally unexpected. Apparently, his heart simply gave out."

Lay was scheduled to be sentenced Oct. 23. He faced decades in prison.

Skilling, reached by telephone at his home in Houston, told The Associated Press that he was aware of Lay's death, but declined further comment.

Prosecutors in Lay's trial declined comment Wednesday, both on his unexpected death and what may become of the government's effort to seek a $43.5 million judgment from Lay that they say he pocketed as part of the conspiracy.

Lay showed no signs of either physical or mental weakness before or during his trial, reports CBS News correspondent Barry Bagnato. He was combative on the witness stand and was hurt by his main lawyer's sudden illness.

Lay led Enron's meteoric rise from a staid natural gas pipeline company formed by a 1985 merger to an energy and trading conglomerate that reached No. 7 on the Fortune 500 in 2001 and claimed $101 billion in annual revenues. He traveled in the highest business and political circles.

For many years, his corporation was the single biggest contributor to President Bush, who nicknamed him "Kenny Boy."

But Enron collapsed after it was revealed the company's finances were based on a web of fraudulent partnerships and schemes, not the profits that it reported to investors and the public.

CBS News legal analyst Andrew Cohen says Lay "came into his criminal trial with a reputation for being a genial guy whose status at Enron put him above the corporate fraud there. But both of those impressions were shattered during the trial when he was feisty and combative on the witness stand and witnesses testified that he was quite involved in the daily business of the company."

Lay also sounded arrogant, defending his extravagant lifestyle, including a $200,000 yacht for wife Linda's birthday party, despite $100 million in personal debt and saying "it was difficult to turn off that lifestyle like a spigot."

A Houston lawyer said that Lay's death doesn't mean his family automatically gets to keep the millions of dollars he made from Enron.

Gerald Treece is a professor at the South Texas College of Law. He says it's "uncharted waters" as to whether the government will keep pursuing a more than $43 million judgment or stand back and let civil cases go forward.

Treece says Lay's widow and family are in "no better position" now than before Lay died. The lawyer says all of the assets are still vulnerable.

Both Lay and Skilling maintained that there had been no wrongdoing at Enron, and that the company had been brought down by negative publicity that undermined investors' confidence.

His defense didn't help his case with jurors.

"I wanted very badly to believe what they were saying," juror Wendy Vaughan said after the verdicts were announced. "There were places in the testimony I felt their character was questionable."

Lay was born in Tyrone, Mo. and spent his childhood helping his family make ends meet. His father ran a general store and sold stoves until he became a minister. Lay delivered newspapers and mowed lawns to pitch in. He attended the University of Missouri, found his calling in economics, and went to work at Exxon Mobil Corp. predecessor Humble Oil & Refining upon graduation.

He joined the Navy, served his time at the Pentagon, and then served as undersecretary for the Department of the Interior before he returned to business. He became an executive at Florida Gas, then Transco Energy in Houston, and later became CEO of Houston Natural Gas. In 1985, HNG merged with InterNorth in Omaha, Neb. to form Enron. Lay became chairman and CEO of the combined company the next year.