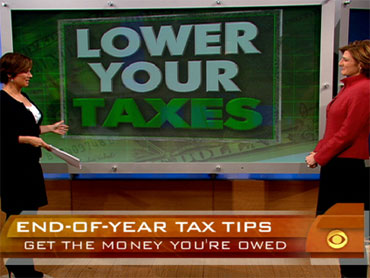 With less than a month left in 2009, the window of opportunity is closing for some key ways to save money on your taxes.

Not to put a damper on the holiday spirit, but April 15 is just a couple months away, and you only have a few weeks left to save money on your 2009 taxes, Rodriguez pointed out.

According to Schlesinger, the No. 1 tax tip is "hunt for job-hunting deductions" - even if you have a job.

"This is the most amazing thing. If you have a job, you can be looking for another job because maybe you're scared, your company's going through a bad time. You can claim on your deductions all things like resume preparation, ads online, in newspapers. You can get a job coach. You can get career counseling," she explained.

"It has to be very specific in your own tax situation, more than 2 percent of your adjusted gross income. But for people who have been out of work for a long time, people who are still in a job, your same line of work, but you may get a little help this year, thankfully, because there's a lot of people in a tough situation," Schlesinger added.

The caveat is it has to be in the same line of work.

"A lot of people who wouldn't have been able to deduct medical expenses may be able to this year. Why?" Rodriguez asked.

"A lot of people had drastically reduced income. The whole deal about deducting medical expenses, it has to be more than 7.5 percent of your adjusted gross income," Schlesinger said.

"What does that mean?" Rodriguez asked.

According to Schlesinger, the bottom right hand corner of your tax return is your adjusted gross income.

"It has to be more than 7.5 percent of that number," she added. "Household income reduced, you may have medical expenses in excess of 7.5 percent of your AGI. If that's the case, by the way, get in a whole bunch of medical appointments before the end of year because you can claim them. If you wait until next year, hopefully you'll have a job."

"This is a great tip except a lot of people think they can't afford to install these energy-efficient appliances," Rodriguez said.

"If you have like $12,000 solar panels, it's great; the government will give you a credit, 30 percent. Also you get a 30 percent tax credit for small projects up to $1,500, windows, doors, and helps with energy efficiency and you get a little help from Uncle Sam."

The fourth tax tip is "dump losers to offset winners."

"If you lost money investing this year, what do you do?" Rodriguez asked.

"You can sell a loser in your portfolio; you can deduct it against something that made money this year or actually just claim it against your total income, up to $3,000 of losses in taxable accounts," Schlesinger said. "You can actually get a little help from Uncle Sam for being a loser. It's the first time Uncle Sam helps you for being a loser."