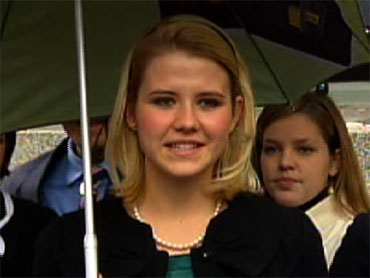 Elizabeth Smart and her family say justice has been served now that the man who held her captive and sexually abused her for nine months has been convicted of all charges.

It has been eight long years for the Smart family, eight years since Brian David Mitchell broke into their family home and kidnapped Elizabeth Smart at knifepoint. CBS News correspondent Whit Johnson reported the jury deliberated just five hours before declaring Mitchell guilty Friday, a verdict that should guarantee a life sentence.

Elizabeth's abductor, Brian David Mitchell, sits behind bars awaiting his sentencing in May. He will almost certainly face a lifelong prison term for kidnapping and sex crimes against the then 14-year-old girl. Elizabeth says she is relieved by the swift verdict.

She told reporters outside the courthouse Friday, "I hope that, not only is this an example that justice can be served in America, but that it is possible to move on after something terrible has happened. I am so thrilled with the verdict. But not only that, I am so thrilled to stand before the people of America today and give hope to other victims who have not spoken out about their crimes, about what's happened to them."

The month-long trial was a gut-wrenching ordeal. Mitchell was kicked out of court for loudly singing religious prayers, Elizabeth and family members had to listen as those nine months of captivity were retold.

Lois Smart said, "There is a way to put those people behind us, and we can move forward with our lives."

At times, the trial was too much to bear. Elizabeth stormed out of court early this month during the defense team's testimony. And she had to relive her abduction on the stand, which she did with stoic bravery.

Ed Smart. Elizabeth's father, said, "I think the hardest part of coming in here was worrying about Elizabeth having to testify. And as a father, I was so grateful for her to be able to say what she had to say, and put that behind her."

Johnson reported Elizabeth will soon travel to France to complete a Mormon Church mission, and then return to college in Utah to earn a music degree. Her message, for now, is one of vindication.

"We can speak out and we will be heard," Elizabeth Smart said.

Johnson added Mitchell's defense attorneys have not yet decided whether to appeal the guilty verdicts. His sentencing is set for May 25.

Ed Smart said on "The Early Show" that his daughter had to reveal a lot more in court aoubt her ordeal than she ever had before.

Ed Smart said, "You know, I think that prior to her testimony, she had been brought in by the prosecutors to, you know, go over things and she called me one day, and she said, 'Dad, you know, what I'm having to say is so much more than what I've ever said before. ... We knew that it was horrible, but to hear it in court it was, you know, it was outrageous but she, you know, I don't know, how she had the dignity, the grace to be able to say it in the manner that she said.

Ed Smart said the verdict has brought some sense of a conclusion to this for his family.

He said, "When we went in on Friday and heard that he was guilty on both counts, it was just kind of like, 'This is what we've been waiting for for eight years. And justice took a long time."

Ed Smart added that he and his wife have always impressed upon Elizabeth that this was not her fault.

He said, "You know, when Elizabeth came home, we wanted her to know that this was not her fault. And I think so many victims get somehow brought into feeling like they have some ownership in what's happened to them. ... And I think that was one thing that Elizabeth has absolutely come, you know, this was not her fault. It was Brian Mitchell. And in facing him in court, in telling the jury and telling everyone -- made the statement, I mean, when she got up and walked out during the nine months she -- she was basically held captive and she did not have the opportunity of getting away. And the times that she did, she was brought back and she might as well have been handcuffed with the thoughts that Brian somehow could get at the family or would kill her."

Ed Smart is active in efforts to raise awareness and legislation for the prevention of crimes against children and young people, specifically with SPcoalition.org and Radkids.org.