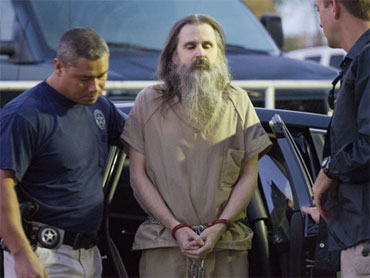 No one is arguing the facts of the case; the issue is the mental competence of the defendant, points out CBS News correspondent John Blackstone.

He reported from the courthouse in Salt Lake City that the main question facing jurors is whtehr Brian David Mitchell, the man who took Smart at knifepoint from her own bedroom in 2002, insane or a master manipulator?

On "The Early Show," Blackstone noted that, during closing arguments Thursday, Smart sat beside her parents in the front row of the courtroom as a defense attorney admitted that Mitchell had kidnapped Smart when she was 14 and raped her repeatedly over nine months. But, he said Mitchell believed he was acting on direct orders from God.

Smart, now 23, showed little emotion as the horrors she endured were detailed again at the trial's closing.

Mitchell, her accused kidnapper, was not in court to hear the closing arguments. Throughout the trial, he has been removed from the courtroom for continually singing hymns as defense attorneys argued he's not guilty by reason of insanity.

Prosecutors say it's all part of an act by a master manipulator.

Psychiatrist Michael Welner testified for the prosecution that Mitchell was not insane, but had plenty of problems.

Last week, Mitchell was taken from the courthouse on a stretcher after suffering an apparent seizure. The defense says Mitchell suffers from delusions -- a conclusion bolstered by Mitchell's own father.

Shirl Mitchell said of his son, "The only sane thing for sane people to do is say he's insane."

Mitchell has said God told him to take smart as his "celestial wife."

Once during the more than month-long trial, Smart walked out of the courtroom as a defense psychiatrist testified that she had selected baby names with Mitchell. On the stand herself, Smart described the night Mitchell took her from her own bed.

She testified, "I remember him saying, 'I have a knife to your neck....Get out of bed and come with me, or I will kill you and your family.'"

Welner said of Smart, "I hope God rewards her in the future and gives her a peaceful life, because she certainly has paid her dues."