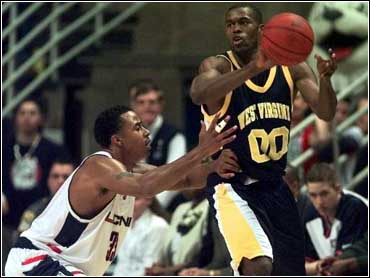 Khalid El-Amin proved that 4.8 seconds can seem like an eternity.

El-Amin drove the length of the court and banked in a shot at the buzzer as No. 22 Connecticut edged West Virginia 72-71 Saturday night.

"I knew I had time to get the shot off. The only thing I didn't know was if it would go in," El-Amin said.

"Coach wanted to get me the ball in the open court and take it all the way for a layup. I lost control momentarily but regained my composure. It was a tough angle but I banked it in."

After West Virginia's Calvin Bowman made two free throws to give the Mountaineers (13-12, 5-9 Big East) a 71-70 lead with 4.8 seconds remaining, El-Amin took the inbound pass and raced down the court for the game-winner.

"It was the longest 4.8 seconds of my life," West Virginia coach Gale Catlett said. "It was a tough loss because we played hard all night."

"We needed something good to happen to us and I thought we made something happen at the end," UConn coach Jim Calhoun said.

Bowman had a career-high 29 points to lead the Mountaineers.

The Huskies let the clock wind down to 20 seconds when El-Amin missed a 3-pointer. Bowman then had two chances to put the Mountaineers up and was fouled with 4.8 seconds left.

UConn built a 22-17 lead midway into the first half on a three-point play by El-Amin, but the Huskies couldn't shake the Mountaineers.

Marcus Goree and Bowman sparked West Virginias comeback, scoring 19 of the Mountaineers' next 21 to take a 38-36 lead at the half.

The Mountaineers' largest lead was 38-32 on a three-point play by Goree with 2:09 left in the half. Two free throws by the Huskies' Tony Robertson and a jump hook by Souleymane Wane just before the buzzer allowed Connecticut to leave the court trailing by only two.

Goree and Bowman combined for 27 of West Virginia's 38 points in the first half.