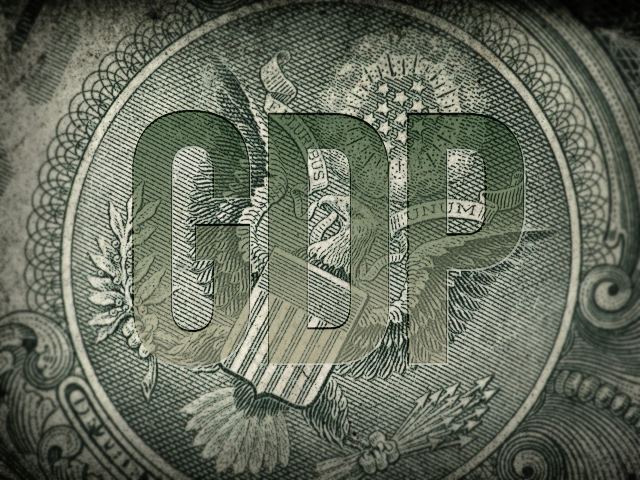 (MoneyWatch) The federal government drastically slashed its reading of how much the economy grew -- only 1.8 percent in the first quarter -- surprising economists who had expected the most recent 2.4 percent growth figure to remain unchanged. Particularly disappointing was the downward revision of consumer spending on services, suggesting that the payroll tax increase is taking a bigger toll on American families than previously thought.

The reaction of the stock market? Happy days are here again!

The Dow Industrials ended the day up 149 points to 14,909, an increase of a little over one percent. The broader S&P 500 index climbed 15 points to 1,603, also a one percent gain. The Nasdaq composite climbed 28 points to 3,376. The major indices had all been even higher earlier in the afternoon, all on the news that the economic picture was not as solid as had been thought.

While it's not a certainty, market strategists are betting that a limping economy means the Federal Reserve won't ease up on its monetary stimulus in the form of bond purchases. That means more money from large investors sloshing into stocks and other investments. Bond prices rose along with stocks, driving yields lower, also a sign that investors think the Fed isn't about to put on the brakes.

"The market reaction seems perverse," said Ed Yardeni, President and Chief Investment Strategist of Yardeni Research. "But the market recently has been roiled by the Fed signaling that they would phase out quantitative easing if the economy continues to improve. The reaction to bad news suggests people are betting the Fed was premature."

Yardeni went on to note that revisions to last quarter's GDP are history. Looking forward to the second quarter, he said recent indicators, such as retail sales, housing data and spending on durable goods all suggest GDP growth for the second quarter should come in at around 2 percent.

"It's good, not great," Yardeni said.

He expects the market to gyrate somewhat, moving "sideways," but thinks the S&P will finish the year at 1,700.

Paul Edelstein, IHS Global Insight's U.S. economist, agrees that the revision to the first quarter GDP is a "rear-view mirror number." But he doesn't expect the second or third quarters to come in any better.

"We think things are going to stay soft," he said. "GDP growth will stay below 2 percent. Job growth will slow, and the unemployment rate will stay at about 7.5 percent. We won't get back above two percent growth until the fourth quarter."

As for the market, he expects confusion about monetary policy is likely to continue.

"There is a possibility about some Fed members being on the fence about tapering," he said. "They might look at this and say fiscal austerity may mean more than we think. They could decide to wait until 2014 for tapering. I think there will still be a lot of volatility. The markets aren't going to know how to interpret news."

Brian LaRose, a technical analyst at market advisory firm United-ICAP, said traders still haven't really digested the implications of the Fed's recent discussions about the possibility of decreasing its stimulus, or what the economic numbers really mean for the market.

"The markets are still trying to make sense of the Fed's comments," he said. "And I don't think anyone has arrived at a decision. In reality, if the economy doesn't get better, the Fed will continue its stimulus program. But the question then becomes, if more stimulus still hasn't worked, maybe it's not such a good thing for the markets."

He said that from a technical standpoint, the market still hasn't broken above key resistance levels to prove that it's likely to go significantly higher. LaRose and other analysts also predicted that the worst days are not over for gold, which plunged dramatically today, losing more than 4 percent.