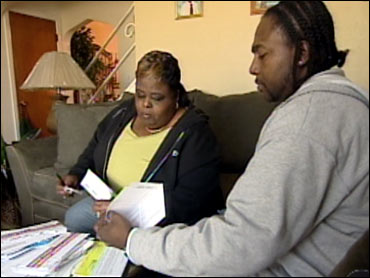 Working as a community counselor on Chicago's west side, Theresa Welsh-Davis knew she'd never get rich. But she thought she made enough to get by, CBS News correspondent Cynthia Bowers reports.

Now she's not so sure.

"I bet you didn't need a government report to tell you we're dealing with inflation," Bowers asked.

"No, I live it every day," Welsh-Davis said. "Every day when I come in and I pick up the bills of I go to the store."

She's seen milk has gone up 29 percent in the last year, eggs are up 36 percent. Meanwhile, her paycheck's stayed the same.

With gas up 30 percent, just getting to work is a struggle.

And there's no let up in sight, the bills keep coming - and that keeps her up at night.

"Every time I write a check, I think God for that one day that I have enough to pay this bill," she said. "But then the phone rings and it's a bill collector saying, well, you didn't pay thit bill."

She says she spending a thousand more a month than she's making. For now she's picking which ones to pay, but knows - one day soon, she may be forced to do the unimaginable: Sell the home she worked so hard to buy.

"It's gonna hurt, the day that I have to close those doors and walk away from the house," she said.

Another potential victim of the troubled economy.