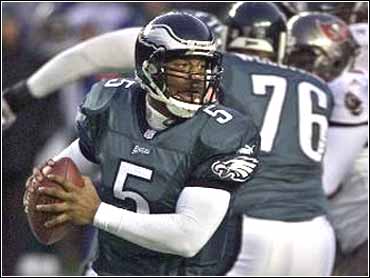 The temperature was 34, and the wind chill was just 11.

If those numbers didn't numb the Tampa Bay Buccaneers, the Eagles' No. 5 surely did.

Donovan McNabb ran for a touchdown and threw for two more, leading the Philadelphia Eagles to 21-3 victory over Tampa Bay in an NFC wild-card game Sunday, sending them on to the Meadowlands to play the New York Giants next weekend.

"You either have it or you don't," Brian Mitchell, Philadelphia's veteran running back, said of the runner-up for the NFL's MVP award. "He has more ability than any quarterback I've every seen."

It was a landmark win for Philadelphia, which was 8-24 the previous two years and 5-11 last season after using the second overall pick in the draft to take McNabb.

But it was also a landmark game for the Philadelphia defense that came in overshadowed by Tampa Bay's fabled unit, but allowed the Bucs just 101 yards in the first three quarters and made the play that turned the game a fumble-forcing sack by Hugh Douglas that set up Philadelphia's first score.

That's been the Philadelphia formula: defense and Donovan.

"They just outplayed us a bunch," said Derrick Brooks, the Bucs' all-Pro linebacker.

For the Bucs, who hoped to become the first team to play the Super Bowl in their home stadium, it was a disappointing end to a 10-7 season that started with title hopes.

It also continued a string that has plagued them even as they became one of the NFC' best teams: They're now 0-20 when gametime temperatures were under 40 degrees, including three losses this season.

McNabb, runner-up to Marshall Faulk for the NFL's MVP award, played much of the game as if the weather was balmy. He finished 24-of-33 for 161 yards and ran for 32 yards on eight carries, and was at his best as he quarterbacked the Eagles to two touchdowns in a span of 3:21 late in the first half that gave Philadelphia control of the game.

With the Bucs leading 3-0 with 3:21 left in the second quarter and the wind in their favor, Shaun King dropped back to pass on a third-and-19 from his own 25. He was sacked by Douglas, fumbled and Mike Mamula recovered for Philadelphia at the 15.

Four plays later, McNabb took the snap on a third-and-goal from five, cut through the line and swerved right for the Eagles' first score.

The sack might have been a messed-up blocking scheme 5-foot-8, 185-pound Warrick Dunn blocking the 280-pound Douglas.

"I was trying to get to him before he threw the ball," Douglas said. "For some reason, the tackle blocked down. I just hit him. I think that made the momentum swing in our way."

It sure did. The Bucs never played well again, on offense or defense.

Philadelphia got the ball back with 1:43 left in the half. Going into the wind, common sense suggested they sit on the ball. Instead, McNabb hit Mitchell for 11 and 13 yards to start the drive that ended when he found Na Brown for a 5-yard touchdown with 12 seconds left in the half.

Then McNabb used up the first 7:44 of the second half going into the wind, a drive that ended with David Akers missing a 36-yard field-goal attempt. Tampa Bay had the ball for only 2:42 in the third quarter.

McNabb clinched the game with a 2-yard TD pass to Jeff Thomason 45 seconds into the fourth quarter at the end of a 10-play, 57-yard drive.

"That was a breakdown in communication," Tampa Bay coach Tony Dungy said of the game-turning sack, on which he said 240-pound fullback Mike Allstott should have been blocking Douglas instead of Dunn.

"That really gave them momentum. They got 14 points going against the wind in the last four minutes of the half and that was basically the game."

Philadelphia's task could be tougher o the road next week.

The Giants, top seed in the NFC, beat the Eagles 33-18 and 24-7, the only two games all season that Philadelphia had no chance to win late.

"We're a different team now," Douglas said. "Those games were early in the season. We'll be ready for them now."