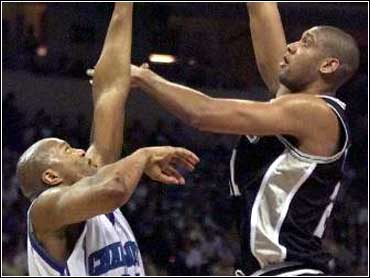 Porter salvaged what looked like a busted play and swished a 22-footer with three-tenths of a second left to give the San Antonio Spurs a 72-70 victory over the Charlotte Hornets on Thursday night.

"He does those crazy things," San Antonio coach Gregg Popovich said. "He's a competitor. He wants to be in those situations."

Porter's winning basket was the Spurs' lone field goal in the final six minutes, a drought that allowed the Hornets to rally from a 10-point deficit.

"It's always a thrill for an athlete to have a chance to have the ball in his hands and put the dagger, so to speak, in his opponent's heart," Porter said. "It was a great chance for us to come up with a road win."

Sitting nearby in the San Antonio locker room, Tim Duncan, 23, laughed when asked how much longer he thinks Porter, 36, can play in the NBA.

Charlotte tied it on a 3-pointer by David Wesley with 21 seconds left. Porter was guarded closely by Wesley when he hit the winner from the left wing. The Hornets couldn't get off a shot before the final buzzer.

Porter said the winning play was not designed for him, but he had little choice but to try to get off a shot after Duncan got surrounded in the paint.

"I was the second or third option," Porter said. "They did a good job of denying him the ball and they threw it out to me and I just tried to create a shot."

Duncan, listed as questionable with a lower abdominal strain, started his 186th consecutive game and played 39 minutes, but he was far from his usual dominting inside presence.

He missed nine consecutive field-goal attempts in the first half on the way to a 6-for-23 outing. Duncan still wound up with 15 points and 12 rebounds, and David Robinson had 16 points and 10 rebounds as the Spurs won for the first time in six road games this season against Central Division teams.

"I really didn't know what to expect until I went up and down the floor a couple times," Duncan said. "Things didn't go right for me, but we won the game, so that's all the matters."

Charlotte's Derrick Coleman had 19 points and a season-high 20 rebounds, and Wesley had a pair of steals and a 3-pointer in the final minute to fuel the Hornets' final rally.

"Terry just made a great shot," Charlotte coach Paul Silas said. "I'm sure they felt the same way when David made his shot."

San Antonio kicked off a three-game road trip by harassing the Hornets into 36 percent shooting.

"It wasn't a beautiful game," Silas said. "It's tough to go inside against their big lineup. They block shots and their perimeter doesn't have to worry about giving help."

San Antonio never trailed in the second half and pushed its lead as high as 69-59 on Robinson's 9-foot jumper in the lane with 6:01 remaining.

But the Spurs missed their next six field goal attempts and turned it over twice, clearing the way for a Charlotte rally. Wesley's steal set up a layup by Coleman that cut the Hornets' deficit to 70-67 with 44 seconds left.

Wesley stripped the ball from Avery Johnson with 32 seconds to go, leading to the tying basket.