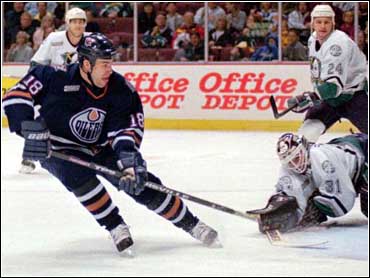 The Anaheim Mighty Ducks handed out little stuffed bears with Guy on them to the first 5,000 youngsters 12 years old and under who attended Sunday's game.

Benched for two games, he returned with a vengeance and made 25 saves in a 3-2 victory over the Edmonton Oilers after spending a week under the tutelage of goaltending consultant Francois Allaire.

"It doesn't matter if you're in your second year or your 15th year you're going to have times where you struggle, and you have to figure it out as soon as possible," Hebert said. "It paid off tonight, but it's one game at a time, and I'm not looking past tomorrow's practice."

The nine-year veteran admitted he was "heavily motivated," and that his primary concern was to get back in focus and into a good rhythm. The work with Allaire was beneficial in that regard.

"It was more a physical week for me, doing a lot movements, working on making my `wall' and pushing side to side," Hebert said. "Francois just wanted to make me get back to the fundamentals, making sure I was squared with the shooter and not be worried about too many things in between."

One of Hebert's best saves came about seven minutes into the second period during a 2-on-1 rush. He slid to his left and robbed Todd Marchant of a short-handed goal during a four-minute high-sticking penalty against Jim Dowd for cutting Jeff Nielsen in the face.

"That's a save that maybe I haven't been able to come up with recently, so it felt goo to make that save," said Hebert, who saw the identical play while watching tape of the Oilers' recent game against Boston.

"I figured with all the speed Marchant had, I had to move a long way across the net. I read the pass and got across as fast as I could, and was able to stay on my feet and get it with my stick. On a short-handed chance like that, you don't want to give them any momentum."

Marty McInnis and Fredrik Olausson scored 1:26 apart early in the first period and Kevin Haller also scored for the Ducks, who ended their three-game winless streak and Edmonton's three-game winning streak. The victory was Anaheim's 20th in 34 meetings with the Oilers, the most against any team since entering the NHL in 1993.

The Ducks accomplished it without leading scorer Paul Kariya, out his third straight game because of a bruised right foot.

Ethan Moreau and Dowd scored for the Oilers, who squandered an opportunity to go over .500 for the first time since the second game of the season. They have lost 17 games by one goal.

"Seventeen one-goal games is a lot to lose," defenseman Janne Niinimaa said. "But the bottom line is, we're still up there in the standings and we can put ourselves in a good position for the playoffs."

The Oilers lead the Northwest Division by six points, following Sunday's 1-1 tie between the Avalanche and Dallas. But coach Kevin Lowe insisted that his team was not looking past the Ducks to Tuesday night's game against the Avalanche in Denver.

"The guys are focused and taking it one game at a time," Lowe said. "My sense is that we were ready today. We just played some shoddy defense early."

After falling behind 2-0 in three of their previous four games, the Oilers did it again before the game was three minutes old.

McInnis got his ninth goal 66 seconds after the opening faceoff when goaltender Tommy Salo left a bad rebound on Oleg Tverdovsky's one-timer from the high slot. Olausson then got a cross-ice pass in the left circle from Kip Miller and put a wrist shot past right wing Bill Guerin, who tried to cover the front of the net when Salo left his crease to challenge the unchecked Olausson.

Haller gave Anaheim a three-goal cushion 53 seconds before the first intermission with a wrist shot. Moreau responded for Edmonton just nine seconds later, backhanding his 15th gol past Hebert's glove on a rebound.

The Oilers trimmed Anaheim's lead to 3-2 in the second. Guerin carried the puck down the left wing and found Dodd cruising down the slot for his fifth goal.