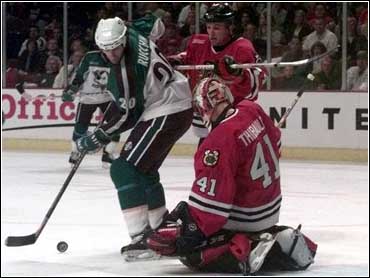 The Chicago Blackhawks played well and the Anaheim Mighty Ducks played poorly. But when it came down to the game's decisive minutes Monday night, it was easy to see which team is in playoff contention and which one isn't.

Ted Donato scored with 2:10 left in the third period Monday night, giving the Ducks a come-from-behind 4-3 win over the Hawks.

The Ducks erased three one-goal deficits and tied the game 3-3 on Kip Miller's goal with 8:29 left in the game. Donato fired the game-winner past Jocelyn Thibault from inside the right circle.

"We played a good game tonight. It's too bad I couldn't close the door," said Thibault, who made 21 saves.

The Hawks lost to the Ducks for third time this season and for the fifth time in the last seven games between the teams.

"We let one get away," said Hawks captain Doug Gilmour.

Donato's eighth goal of the season was his third game-winner and, with his two assists, he went over 300 points for his career. Miller also had two assists for Anaheim, which was five points behind Los Angeles for the eighth playoff spot in the Western Conference coming into Monday's game.

"We didn't play a very strong game, but it was a game we stayed in," said Anaheim coach Craig Hartsburg. "It may be our ugliest win, but it was our best win. It was two points we needed."

Tony Amonte recorded his fourth two-goal game of the season and Dean McAmmond added a goal for the Blackhawks, who outshot the Ducks 28-25.

Chicago also hel Anaheim's high-scoring pair of Paul Kariya and Teemu Selanne to a single point. But the Ducks also got goals from Matt Cullen and Steve Rucchin and won for the fourth time in seven road games.

"Paul and Teemu couldn't get much going," Hartsburg said. "A game like that, you need somebody else to step up. We had to battle through it but any time we can come back on the road and score in the last couple of minutes, it certainly gets a big rise out of our players."

Amonte gave Chicago a 2-1 lead with less than one second remaining in the first period when he stuffed in a Boris Mironov pass from just outside the crease.

Amonte's second goal was shorthanded with 9:04 left in the second period and the score tied 2-2. Amonte stole the puck from defenseman Fredrick Olausson deep in the Ducks' end and fired a shot under the legs of goalie Dominic Roussel.

Amonte's goal was Chicago's fifth short-handed tally of the season.

The Ducks re-tied the game when Vitaly Vishnevski fired a shot into a crowd from just inside the blue line with 8:29 left in the third period. Miller deflected the shot and the puck zipped past Thibault's glove side and into the net.

McAmmond gave the Hawks a 1-0 lead just 1:53 in when his short shot deflected off Roussel's glove and slid across the goal line. The Ducks tied the game just 21 seconds later when Cullen's rebound shot ricocheted off Brad Brown's skate and past Thibault.

Selanne, assisted on Rucchin's goal and needs one point to reach 700 in his career.