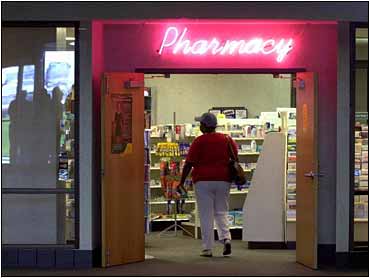 The nation's largest drugstore chains say they are working to better protect patient privacy after an investigative TV report turned up sensitive information about hundreds of customers in trash bins in cities around the country.

The station said its investigation began after authorities said a grandmother from Bloomington, Ind., was robbed at her front door by a thief found her address in a CVS trash bin. The man posed as a pharmacy employee to try to steal her prescription for the painkiller Oxycontin, according to authorities.

As part of its response, Deerfield, Ill.-based Walgreens Co. said it was now instructing staff to lock outdoor trash bins at all times and was reviewing the way it disposes of patient information.

In Woonsocket, R.I., where CVS is headquartered, 460 patient records were found in CVS trash bins, the station said. Responding to the findings, CVS sent a statement acknowledging it was unacceptable that patient information could be retrieved from the bins.

"Nothing is more central to our health care operations than maintaining the privacy of health information," the CVS statement said.

The report aired in multiple installments up through this month.

CVS, which operates about 6,200 stores nationwide, said it was now requiring all trash generated in its pharmacies — and not just trash containing patient information — to be placed in special bags that are then returned to CVS warehouses. It said it was also holding in-store training sessions to review proper procedures for handling of the pharmacy trash.

"Our policy, when it's followed correctly, is foolproof," said CVS spokesman Mike DeAngelis. "But if there's a lack of execution, that's where issues arise. So we've enhanced the policies and procedures in order to make sure that they are followed."

Walgreens, the nation's biggest drugstore chain by revenue, said it had e-mailed all of its stores to reiterate its policy for handling patient information.

The company also said it was now requiring that patient vials be returned to pharmacy warehouses to be thrown out. Previously, staff had been instructed to either black out patient information or remove the label from the vial before putting it in the trash. Outside trash bins are also to be locked at all times, the company said.

Walgreens spokeswoman Carol Hively said Thursday the company was concerned certain employees were not following proper procedures and was trying to reinforce the rules. But she said other TV stations that have conducted similar investigations have not found privacy problems.

"We feel that having seen these other reports from around the country where other TV stations randomly selected Walgreens stores and there was a good outcome makes us feel that these efforts were successful," she said.

Camp Hill, Pa.-based Rite Aid Corp., the nation's third-largest drugstore chain, is enforcing current policies and has not made changes, said spokeswoman Jody Cook. She said company policy calls for pharmacies to shred confidential patient information, such as prescription labels. If the store is not set up to do that, then the information is to be sent back to pharmacy warehouses to be destroyed.

"We have policies in place to protect patient information, so really it was more of a retraining," Cook said.