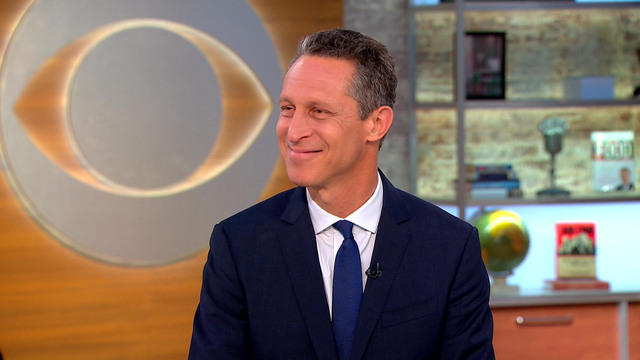 The ongoing debate over which foods are most healthy is the subject of Dr. Mark Hyman's latest book, "Food: What the Heck Should I Eat?" Hyman, who directs the Center for Functional Medicine at the Cleveland Clinic, said on "CBS This Morning" that people are confused because the dietary recommendations of our government have been based on poor science.

Should we not worry about cholesterol?  "No," he replied. "In fact, the government in the guidelines in 2015 said we should no longer worry about dietary cholesterol, meaning we kind of got it wrong on the egg whites for a long time."

Hyman's book contains a Nutrition IQ Quiz, and some of the answers may surprise you. (Is oatmeal a healthy breakfast? No!  Is red meat unhealthy? No! Is vegetable oil better for you than butter? No!)

"We now know that food is information – it's instructions that literally change your gene expression, regulate your hormones, can affect your immune system,  inflammation in your body, even affects your gut's microbiomes. Every bite of food you take is really like instructions to control your operating system of your biology."

"Your message is stay away from the processed foods," said co-host John Dickerson. "And stay away from sugar, right? Basically, you eat real food, you're going to be in a pretty good place?"

"It's not that hard," Hyman said. "I often speak at churches. I say, 'It's really easy. Just ask yourself, Did God make this or did man make this? Did God make a Twinkie? No. Did God make an avocado? Yes.' It's pretty simple."

As for all the man-made, processed foods Americans consume today, he says, "Most of the stuff we eat are food-like substances, they're highly processed, highly refined, which drive diabetes, obesity, heart disease, chronic disease. We really should be eating food."

He said that there is overwhelming evidence about sugar being detrimental, much more so than salt. "Sugar is the biggest driver of obesity, type-2 diabetes, cancer, heart disease, even dementia — they're calling it type-3 diabetes. And it's not fat, it turns out. And that's why we got the whole story wrong.

"We're told to eat six to seven servings of bread, rice or pasta a day by the government in the Food Pyramid. It should be called the Food Tombstone!"

And does milk do a body good? "We've been told by the government to drink three glasses of milk a day; kids should have two," said Hyman. "Truth is, there's very little evidence to support that. The new guidelines actually were assessed by the National Academy of Sciences and they said there's very little evidence for some of these things that are recommended, and it's highly industry-influenced.

"They have found that the committee has ignored a lot of important data — for example on saturated fat, low-carb diets, meat — and they've basically just assumed that these are bad. They've also not represented the science fully. They have not completed full reviews, and they're also industry-influenced. For example, the Dairy Council funds some of the committee members on their work. So, there's conflict of interest issue that was brought up by the National Academy of Sciences."

"You say you're not married to any one particular diet?" asked co-host Gayle King.

"I don't have any axe to grind, I don't have a particular point of view I adhere to," Hyman said. "I just want to know what the science says. I've been practicing nutritional medicine for 30 years; I've actually been studying nutrition for 40 years. We now know so much about what to eat and what not to eat, and that's what I tried to summarize in this book."