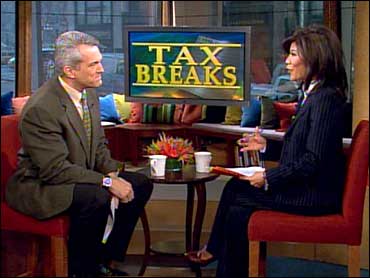 And that's why it's so amazing that every year, Americans send some $945 million too much to the Internal Revenue Service.

The Early Show financial adviser Ray Martin says the overpayments are largely because taxpayers don't take advantage of deductions they're entitled to.

A report issued by the federal Government Accountability Office says the number of tax returns on which itemized deductions are left off could be as high as 2.2 million. That report estimated that, as a result of taxpayers not claiming the deductions they could have been entitled to, they overpaid about $945 million, with an average overpayment of $438 per taxpayer.

The report, issued in March 2002, used a random sample of about 164,000 tax returns to estimate the number of taxpayers who may have overpaid their taxes by claiming the standard deduction instead of itemizing deductions. The study calculated the amount of itemized deductions that could have been claimed by collecting data from lending institutions, employers, and Department of Labor estimates for mortgage interest, mortgage points, real estate taxes and state and local income taxes.

The report was based on data from sampling tax returns from the 1998 tax year. Further searches failed to find a more recent version of the report, leaving room to speculate if it's been discontinued due to government cost-cutting. I'll leave it to you to decide which costs would be a concern: the cost of the report, or the "cost" of alerting taxpayers of ways to cut their tax bill.

My sense from recent professional experience is that this situation hasn't improved much. It is likely that more taxpayers are leaving deductions on the table because the number of taxpayers who bought their first home since the study was conducted has increased.

Here some tips to help folks (and their tax preparers) identify some of the deductions and credits that often go unclaimed:

The first thing taxpayers should do is review a copy of Schedule A — Itemized Deductions and applicable instructions, before sitting down themselves or with a professional, to prepare their tax returns.

Major categories of expenses that may be deductible include:

According to the report, the two biggest categories for which the most reliable data was available was for interest and taxes paid. Over 61 percent of the returns in the sample indicated that folks who owned a home missed taking deductions for the "big three": mortgage interest, real estate taxes and state and local income taxes.

After estimating the total of deductible expenses, the next decision is whether to itemize or take the standard deduction, which is a "gimmee" amount every tax filer gets to claim, regardless of whether they have enough itemized deductions.

For tax year 2006, the standard deduction amounts are:

For homeowners, its relatively easy to add up the "big three" — mortgage interest, real estate taxes and state and local income taxes — and determine if these amount to more that your applicable standard deduction. Even if these expenses don't total more than the standard deduction, it may still be worth it when you add in other categories of deductible expenses, such as charitable contributions. The study said factoring charitable contributions in along with the "big three" explained about 88 percent of the returns where deductions went unclaimed.

When It's Good to Give

Giving gifts to charity rewards a donor twice — when you give, and at tax time. For most types of charitable gifts, you can deduct the full amount of the gift against up to 50 percent of your adjusted gross income. The most common form is for gifts by cash, check, or from paycheck deductions. Gifts of $250 or more require providing the name and tax ID number of the charity for 2006. For 2007, all such gifts, regardless of the amount, must be supported by bank records, paycheck statements, credit card statements or other written documentation from the charity.

But due to some donation-deduction restrictions passed last year, you'll need to be more careful when it comes to non-cash donations of property. For example, if you donated household items or clothing after Aug. 17, 2006, the items must be in "good" or better condition for the deduction to be allowed. If the IRS questions your donation deductions, you will need to provide proof of condition, either by producing photographic evidence or a written statement of condition from the charity that received the donation.

The credit most widely available to the most people is the $1,000 child tax credit. Unfortunately, this credit phases out for joint filers with an adjusted gross income of $110,000, and $55,000 for single filers.

Also available in 2006 is the $1000 Savers Credit, which is designed to encourage retirement savings by lower income tax payers. To get the $1,000 tax credit, you have to contribute $2,000 to a retirement account, and this credit begins to phase out for joint filers with an adjusted gross income of $50,000 and $25,000 for single filers.

For people who invested in foreign stock mutual funds in taxable accounts, they should look into the foreign tax credit. This credit is available when a mutual fund you own pays taxes in a foreign country. If you own a foreign stock mutual fund, look on the form 1099 that the fund sent to you. On that form you will see a box labeled foreign taxes paid. If the amount of foreign tax credit claimed is more than a few hundred dollars, you may need to complete form 1116 to claim the Foreign Tax Credit.

There are no studies that suggest that tax professionals get bigger refunds for their clients. In fact, the GAO study indicated that 49 percent of the tax returns where taxpayers may have overpaid due to failure to claim itemized deductions were prepared by a third party.

Not having the time or resources to prepare your own return is the most popular reason for using a professional tax preparer. Using a tax pro with experience in the unique and legitimate tax strategies of your specific industry or situation can also help you maximize your tax savings.

But don't be tempted to save a tax pro's fee by "following last year's forms" to do this year's tax return. If you do this, at least hire a tax pro to look over what you did to determine whether you did this correctly or if there are new forms you might need to file.

A professionally prepared tax return is well worth the reasonable fee most pros charge.

But having a "Preparers Signature" at the bottom of your return doesn't mean it has more credibility with the IRS. The IRS requires preparers to provide their name, social security number and signature in the Paid Preparer section so the IRS can verify that they are reporting their income from this activity.