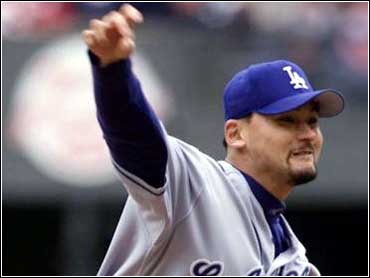 Two games, 25 runs. The Los Angeles Dodgers are onto something here.

Todd Hollandsworth opened the game with a homer, starting a four-homer barrage that swept the Dodgers over the Cincinnati Reds 16-2 Saturday.

Kevin Elster, Eric Karros and Gary Sheffield also homered as the Dodgers put up their highest run total since a 17-11 victory at Colorado on May 6, 1995.

"It's fun to be on a team when you have a lineup like we have, that has the balance up and down the lineup that we have," said Sheffield, who has homered in five of his last seven games while hitting .382.

The only folks not having fun were wearing red. The Reds' pitching staff has given up 25 runs, 26 hits and six homers in the first two games of the series.

Heading into the season, the Reds knew they'd score a lot of runs. The question was how many their pitching staff would give up.

The answer so far: way too many.

"We've said many times that we need our starters to take us deeper and it didn't happen again," manager Jack McKeon said. "We can't keep using our bullpen like that day after day. But it's early. We've been in worse shape than this. We just ran into a hot club and our pitching went south."

One drive after another went out. Pete Harnisch (0-2) gave up nine runs for only the second time in his career and three homers for the first time since 1997.

Harnisch, the Rds' top winner the last two years, missed his last start with tightness in his forearm. His return to the mound was disheartening three homers, one triple, three doubles, a single and five walks in 4 2-3 innings.

The right-hander said he felt fine, but couldn't control his fastball.

Elster put the finishing touches on a 9-2 win Friday night by hitting a grand slam in the ninth off Norm Charlton. On his first swing Saturday, he hit a two-run homer off Harnisch for a 4-1 lead in the second inning.

Karros added a three-run shot off Harnisch and Sheffield hit a two-run homer, his seventh, off Manny Aybar in the sixth for an 11-1 lead. The Dodgers added five runs in the ninth off Charlton.

In his two appearances since rejoining the Reds, the former "Nasty Boy" has given up nine runs, six hits and six walks in three innings.

Chan Ho Park (3-1) gave up only one hit in five innings Michael Tucker's solo homer in the first before leaving with a blister on the middle finger of his pitching hand. Manager Davey Johnson thinks he'll have to miss a start because of the blister.

"It's about the size of a dime," he said. "It was very painful. We were fortunate he finished the fifth. They drained the blister and took some skin off."

Cincinnati played its first game without shortstop Barry Larkin, who tore tissue in the middle finger of his glove hand Friday night and had surgery. Gookie Dawkins was called up from Double-A and started at shortstop, going 0-for-4.

Ken Griffey Jr., playing with a tender back, went 0-for-3 and came out when the Reds made several substitutions after the sixth inning. After one awkward swing in the third inning, a trainer came out to check on him.