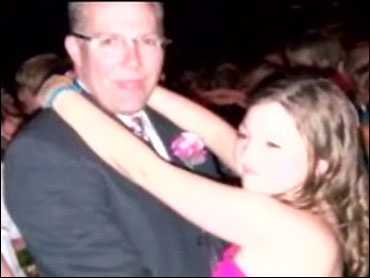 Prom night is memorable for most teens, but it may be even more so for Stefani Pentiuk of Leland, Mich.

The teen was surprised at her prom when she got a "heartwarming" reminder of the past.

Ten years ago, when Pentiuk was 8-years-old, she was faced with transplant surgery after a virus severely damaged her heart.

She would only survive with surgery, but scared, she asked her doctor, a cardiologist in training at the Mayo Clinic, if she would survive.

Dr. Mike Ackerman replied with a promise: "Not only will you live through the transplant, but I'll be taking you to your prom."

She did survive, and a decade later, he fulfilled his promise. A few weeks ago, the doctor flew to her Michigan prom and surprised his former patient when he tapped her on the shoulder and asked her to dance to the Rascal Flatts song "Bless the Broken Road."

"You only get a couple of those moments in your life if you're lucky." Ackerman told CBS News. "I'm so blessed to have gotten that one."

The pair recalled the dance on The Early Show Friday, with Pentiuk's mother and father, Heidi and Perry Pentiuk.

"This little girl just needed a word of encouragement to say you know what, we're gonna be A-OK."

Heidi said she remembered and sent a note, inviting him to come.

Ackerman said when he received the note, he said he thought, "We gotta make this happen."

Stefani said she was "completely surprised" when she saw her doctor walk on the dance floor.

"I started crying and shaking all at the same time," she said. "I was filled with so many emotions, just completely shocked. I'm so blessed to have someone come two states away just to dance with me."

But Pentiuk faced another challenge last year when her kidneys began to fail from the transplant anti-rejection medication.

So her mother stepped in and donated one of hers.

Stefani, 18, said she feels better than ever, as she faces the future.
She will graduate from high school in June, and next fall she'll be attending Hope College in Michigan.