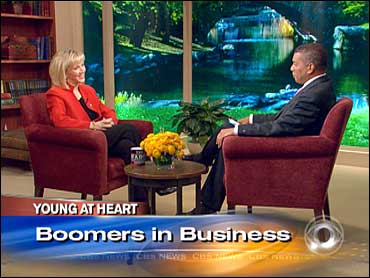 A growing number of baby boomers between 55 and 64 years old are taking the business plunge, according to AARP The Magazine, choosing to become entrepreneurs.

"Out of ambition or necessity, more than a million boomers every year start working for themselves," the magazine says.

Whether they come out of retirement or leave jobs or the jobless rolls to start their own companies, "The number of self-employed Americans between the ages of 55 and 64 grew 29 percent to 1.85 million in the past five years, and those over the age of 65 increased 18 percent to 756,000," reports the federal Bureau of Labor Statistics.

"One feeling is that it is now or never," says Perry. "These are people who have worked by other people's rules for most of their lives. So now it's about freedom not power, making your own rules. Older entrepreneurs have a big advantage over their younger competitive entrepreneurs: wisdom and more experience."

TO TAKE A QUIZ FROM AARP THE MAGAZINE TO SEE IT YOU'RE CUT OUT TO RUN YOUR OWN BUSINESS, click here.

To read the magazine's article on this, click here.

To watch the segment,