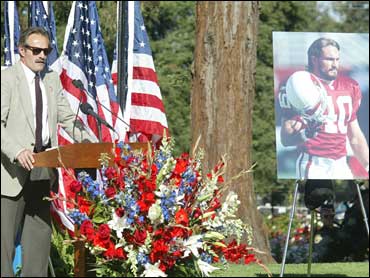 The Army has investigated the death of Pat Tillman, yet again. They say he died as a result of friendly fire.

Friendly fire is a fact of war. It happened.

But what happened after Tillman was killed has his family outraged.

The Army originally said Tillman was killed by the Taliban. Here was an NFL star who gave up playing for the Arizona Cardinals so he could become an Army Ranger. It was his response to the terrorist attacks of 9/11.

A memorial service was held for fighting in Afghanistan; Tillman was awarded the Silver Star. But at that ceremony was a general who knew the real story. He'd been told that Tillman had likely been killed by fellow Rangers. That knowledge, by Army regulation, was owed to the Tillman family.

Yet it wasn't until 35 days after his death that they began to learn the truth.

The Tillmans released a statement Monday night which basically says the Army hasn't given them a reason to trust them since their son's death. The latest investigation hasn't changed a thing.