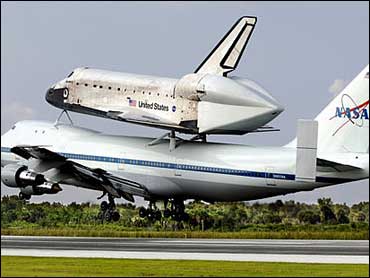 Discovery arrived back at its home port Sunday atop a jumbo jet following a 5.8 million-mile journey through space — the first by a shuttle in 2½ years — and then a jog across the country.

The shuttle, bolted to the top of the modified Boeing 747, flew from its last pit stop in Louisiana to the Kennedy Space Center and, at midmorning, touched down on the runway where it should have landed almost two weeks earlier.

One of the seven astronauts who had ridden Discovery into orbit, Stephen Robinson, was among the crowd that gathered at the landing strip to welcome the shuttle home.

"As much as a person can love a machine, I really love that bird and look at this magnificent sight of it," Robinson said, gazing at the shuttle behind him, "out here on the runway and back where it belongs at home with the people who take care of her."

Launch director Mike Leinbach was thrilled to get Discovery back from California, where it landed Aug. 9, but couldn't help but think of Columbia's catastrophic return that Saturday morning in February 2003.

"I feel like a family member has come home in one piece and safe, and it's just so damn good to see an orbiter whole again on the back of a 747," Leinbach said. "It's just an emotional time. It's a beautiful sight."

Bad weather in Florida prevented Discovery from returning here after two weeks in space. Instead, the first shuttle mission since the Columbia tragedy ended some 2,200 miles away in Southern California, costing NASA an extra $1 million for the cross-country trek.

Discovery and the jetliner left California's Edwards Air Force Base on Friday and had to spend an extra night at Barksdale Air Force Base in Louisiana because of poor weather.

The shuttle still is loaded with the gear and trash it picked up at the international space station. All that will have to be removed, and the shuttle thoroughly inspected, before NASA can start readying it for the next flight.

Late last week, Discovery was moved to the start of the launch lineup after NASA decided to delay the next mission until at least March. Atlantis had been scheduled to fly in September, but the loss of an alarming amount of foam insulation from Discovery's fuel tank resulted in a grounding of the shuttle fleet.

Vehicle manager Stephanie Stilson, who accompanied Discovery back from California, said the spacecraft shows remarkably little damage, although its nose cap — a particularly vulnerable area — has a ding.

Stilson said the chip in the nose cap's thermal shielding is smaller than the tip of a pinkie finger — "very, very minor damage" — and workers should be able to easily repair it.

Engineers do not know whether launch debris caused the ding, Stilson said. A preliminary look at Discovery's wings — the place where Columbia was struck by foam — has uncovered no damage.

Altogether, just over one pound of foam came off Discovery's tank during liftoff on July 26, most of that in a single 3-foot section.