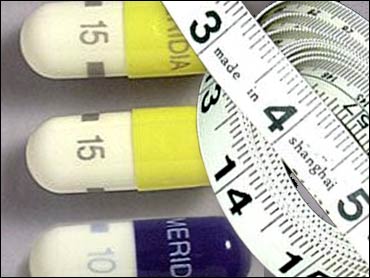 There's no free lunch with diet pills, new research concludes: They work much better accompanied by the hard work of dieting and exercise.

The study backed by the National Institutes of Health is the biggest and best yet to demonstrate why obese people should adopt healthy habits, even if they take weight-loss drugs, researchers said.

"If you pit this medication against your favorite all-you-can-eat buffet, the ... buffet is going to win nine out of 10 times. So it's important you try to modify eating habits," advised University of Pennsylvania psychologist Thomas Wadden, who led the study published Thursday in The New England Journal of Medicine.

Yet in the one-year study, the most successful patients took the weight-loss drug Meridia along with 30 sessions of group counseling that promoted a 1,500-calorie daily diet and half-hour walks on most days. It was especially effective when patients recorded how much they ate each day.

Obese people who took pills alone typically lost 11 pounds in the study. When they added the full program promoting lifestyle changes, they lost 27 pounds, more than twice as much.

A third group took the drug with brief doctor's counseling, and a fourth underwent only group counseling. Within five months, those two groups lost a bit more weight than the group that only took the drug, but all three of these groups were roughly equal after a year.

It is unclear how well the study patients will keep off their lost weight in future years. Researchers also hope that future studies will clarify whether doctors can offer better counseling to approximate the results of extended group sessions. Such in-office sessions would be faster and cheaper.

Dr. Samuel Klein, an obesity expert at Washington University in St. Louis, said the study nonetheless establishes the importance of coupling dieting and exercise with drug therapy in obese patients. Otherwise, he warned, "you expose them to all the risks and all the costs of the medication — without the full benefits."

While acknowledging that lifestyle changes are difficult, specialists widely prefer them for patients who can shed pounds that way. The side effects of Abbott Laboratories' Meridia, known chemically as sibutramine, include higher heart rate and blood pressure in some patients.

Dr. Susan Yanovski, at the National Institutes of Health, warned in an accompanying editorial that obesity medicines should undergo especially careful scrutiny for safety, since they are often misused by patients who are not obese.

Roche's Xenical, or orlistat, is the other federally approved weight-loss medication for extended use. Wadden has consulted or done other work for both Abbott and Roche, and some of his research colleagues also disclosed industry connections.

Another study in Thursday's journal seemed to strengthen prospects for another weight-loss medication that Sanofi-Aventis hopes to market.

The drug, rimonabant, lowered a variety of heart-risk markers in heavy patients who had unhealthly levels of cholesterol and fats in their blood. Sanofi-Aventis funded the study.