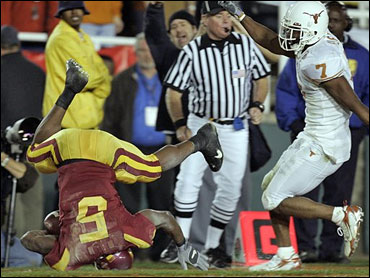 New Orleans Saints running back Reggie Bush and his family appear to have accepted gifts, money and other benefits worth more than $100,000 from two marketing agents while the Heisman Trophy winner was still playing at Southern California, according to a report posted Thursday on Yahoo.com.

The report says Michael Michaels, a marketing agency investor who wanted to represent the football star, and current Bush marketing agent Mike Ornstein lavished Bush and his family with gifts while he was still at USC, each hoping to entice him to sign with them once he left school.

Bush eventually chose Ornstein, which caused a falling out between Michaels and Bush's family.

Speculation over whether Bush and his family received money arose earlier this year in reports that his mother and stepfather didn't pay $54,000 in rent during the year they lived in a house owned by Michaels, who later said the family promised to repay him once Bush went pro.

The NCAA prohibits student-athletes and their families from receiving extra benefits from agents or their representatives. Any improper benefits could lead to NCAA sanctions against USC and retroactively cost Bush his college eligibility and Heisman Trophy.

The report was based on an eight-month investigation by Yahoo Sports, citing documents and interviews with on-the-record sources close to the situation. It lists several instances in which Bush and his family appear to have received financial benefits, including: