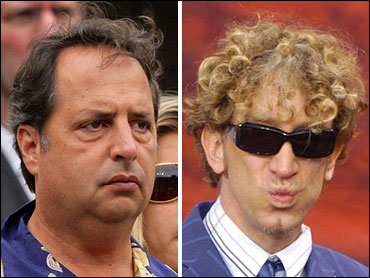 Andy Dick is known for pushing the boundaries of propriety. He has licked several celebrity faces, including Farrah Fawcett's. But fellow comedian Jon Lovitz accuses him of having a much darker side.

The two funnymen ran into each other at the Laugh Factory in L.A. on Wednesday. According to the New York Post's Page Six, owner Jamie Masada witnessed the assault and said that Lovitz picked up Dick by the head and repeatedly smashed him into the bar.

The bad blood dates back nearly 10 years to a Christmas party at the late Phil Hartman's house, where Lovitz said Dick gave Hartman's wife cocaine, setting her back on a downward spiral after she had been sober for 10 years. Five months later, she shot and killed Hartman, Lovitz's fellow "Saturday Night Live" alum.

"Andy was doing cocaine, and he gave Brynn some after she had been sober for 10 years. Phil was furious about it, and then five months later he's dead," Lovitz told Page Six.

Lovitz also said that when he filled in on the sitcom "Newsradio" after Hartman died, he told costar Dick, "'I wouldn't be here now if you hadn't given Brynn that cocaine.'"

Lovitz also said he didn't regret roughing up Dick, who he said most other comics consider a jerk. Lovitz also told Page Six that Dick once drunkenly told him that he put the "Phil Hartman hex" on him and that he was the next one to die.

"I said, 'What did you say?' and he repeated it. I wanted to punch his face in, but I don't hit women," Lovitz said.

Lovitz told Page Six that when he saw Dick last week, he wanted Dick to apologize for the Hartman hex comment.

"First he says, 'I don't remember saying that.' Then he leans in and says, 'You know why I said it? Because you said I killed Phil Hartman.' Which I never said. Then he asked me to be in his new movie," Lovitz told Page Six. "I grabbed him by the shirt and leaned him over and said, 'I don't want to be in your movie! I don't want to be in your life!' I pushed him against the rail. Then I pushed him again really hard. A security guard broke it up. I'm not proud of it ... but he's a disgusting human being."

Dick's rep did not immediately return calls for comment.