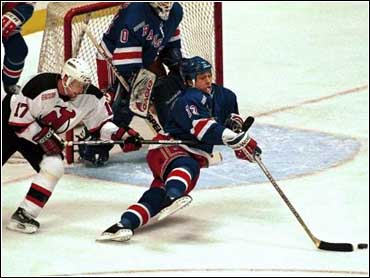 The chant of New Jersey Devils fans to taunt the New York Rangers has changed from "1940" to just plain old "19."

The Devils beat the Rangers 4-1 Wednesday night, extending their unbeaten streak over their rivals to 19 games.

New Jersey is 13-0-6 against the Rangers in regular-season games since last losing on Jan. 12, 1997. The teams, which finished their regular-season meetings, tied 2-2 on Tuesday night at New York.

Defensemen Brian Rafalski and Scott Niedermayer scored power-play goals in the second period and Bobby Holik and Patrik Elias also scored for the league-leading Devils, who won for the 15th time in 21 games (15-3-3).

Martin Brodeur made 26 saves to record his 32nd win and the New Jersey power play converted three of four chances.

"It doesn't really matter what kind of chances we get," Rangers center Petr Nedved said. "He denies them. It's frustrating. We should have ended up with more than one goal."

When the Rangers won the 1994 Stanley Cup, snapping a 54-year drought, the original chant stopped. But the new jeer was born Wednesday night in the game's final seconds.

The game also ended an intense stretch in which the teams met three times in the span of eight days. The Devils had the upper hand in the mini-series with two wins and a tie.

Valeri Kamensky scored the goal for the Rangers, whhad won five of six road games. One positive for the depleted Rangers was the return of defenseman Brian Leetch. The Rangers captain missed 32 games with a fractured right forearm.

"The thing that hurt us was that we were undermanned," Rangers coach John Muckler said. "No question. I thought the team played hard."

Devils captain Scott Stevens felt the Rangers wilted as the game went on.

"You think you'll have an off night and they're going win one night," he said. "There is no question they've played better of late. After the first period they seemed to tire a bit. They don't use as many people in a back-to-back situation. You could see that when we took over in the second and third periods."

Kamensky scored first in the spirited opening period. The Rangers showed excellent rotation on the power play, moving the puck around the perimeter until Jan Hlavac found Kamemsky in the right circle at 12:27.

Holik drilled a shot past Kirk McLean from the slot hash mark on the right circle with 2:52 remaining in the first.

New Jersey dominated the second period, running up a 12-1 shot advantage midway through the period. The Devils, who outshot the Rangers 18-7 for the period, pulled ahead at 5:50 when Rafalski scored.

"We haven't had many in the last few games," Rafalski said. "It was good to get three like that."

Niedermayer also crashed the slot and took advantage of poor clearing by the Rangers penalty killers to flip a shot over McLean at 7:27.

Elias scored the only goal of the third period, into an empty net, with 56.7 seconds remaining.