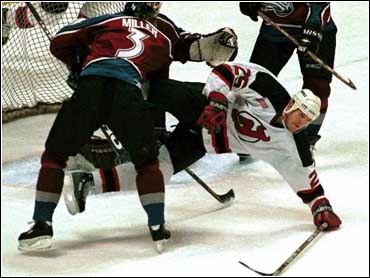 Even playing into the hands of Peter Forsberg and the Colorado Avalanche with wide-open hockey didn't slow down the New Jersey Devils.

Scott Niedermayer and Scott Gomez scored third-period goals and the Devils extended their unbeaten streak to seven games (5-0-2) by blowing a two-goal lead and then rallying from two down to tie the Avalanche 5-5 on Thursday night.

The entertaining game also featured two goals one awarded on replay and an assist by Forsberg, and a shot off the goal post by Joe Sakic with 14 seconds left in overtime.

However, the surprise was the Devils' ability to go up and down the ice instead of playing a more defensive type game.

"It was fun," said Gomez, whose game-tying power-play goal was deflected into the net by Colorado defenseman Jon Klemm. "We can't afford to do this in the playoffs but at the same time we have the guns, too. But you don't want to get into that too much, I don't think any team does."

Colorado didn't mind, especially with Forsberg back in the lineup for the first time since sustaining a concussion on Feb. 1. He missed five games.

"I've been feeling good for a couple of days," Forsberg said. "I was close to playing in Washington (Tuesday). I kind of knew for a while I would play today. I felt good."

Chris Dingman, Brian Rolston and Alex Tanguay also scored for Colorado which has only one win in six games (1-3-2). Marc Denis, playing with Patrick Roy out with a sore neck, made 27 saves.

John Madden, Petr Sykora and Randy McKay had the other goals for the Devils. Goalie Martin Brodeur, who was credited with a goal on Tuesday, added an assist and 18 saves.

Niedermayer got the Devils within a goal with a shot from the top of the right circle at 4:03 of the third and Gomez scored on a power play at 10:25.

The puck was actually put past Denis by Colorado defenseman Jon Klemm, who was trying to knock down a pass from the corner by Gomez to Patrik Elias.

"The way it looked I thought Patty got it in," Gomez said. "But hey, a game like this, put it at the net."

Until then, Forsberg had put on a show. He gave the Avalanche a 4-3 lead with his replay goal which came after the teams left the ice after the second period.

Picking up the puck in center ice, the Swede carried it all the way into the Devils zone, faked a slap shot, skated around Brodeur and dragged the puck toward the goal line with 13 seconds left in the period.

Forsberg raised his stick, but the goal light didn't come on as defenseman Ken Daneyko seemingly cleared the puck off the goal line. Replay showed Daneyko missed by a couple of inches. The final 13 seconds of the second period were played before the start of the third.

Fifty two seconds after the final period started, Forsberg set up Tanguay for a one-timer into a virtually open net.

However, Niedermayer got New Jersey within 5-4 with a slap shot from the top of the right circle at 4:03 and Gomez tied it on the power play.

"Coming into New Jersey you know it's going to be a tough game," Forsberg said. "They've been playing well and it's hard to beat them. Maybe later tonight it will feel OK to get a tie. Up 5-3 and we hit a post in OT, we're a little disappointed."

Badly outplayed for more than a period and a half, Colorado woke up after McKay scored on a breakaway to give New Jersey a 3-1 lead at 11:42 of the second.

Capitalizing on mistakes by the Devils and good screens in front of Brodeur, Rolston and Forsberg scored 55 seconds apart to tie it at 3-3.

Madden gave the Devils a 1-0 lead and tied a franchise record by scoring his fifth short-handed goal of he season at 3:10. Sykora beat Denis in close a little more than three minutes later to give New Jersey a 2-0 advantage.

Rolston, acquired from New Jersey for Claude Lemieux on Nov. 3, banked a point shot off Dingman's leg with 58 seconds left in the period to cut the lead to 2-1.