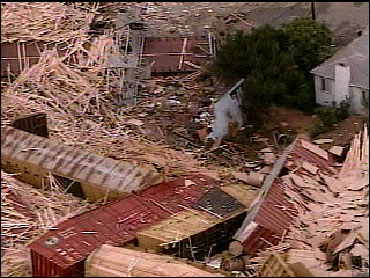 A line of train cars broke loose in a switching yard and rolled more than 30 miles before workers derailed them to avoid a potential disaster in Los Angeles, launching tons of lumber onto trackside homes but causing only a handful of injuries.

Aerial footage from CBS affiliate KCBS showed bundles of wood burying the train cars, with a close up of one car with its wheels broken off. Footage also showed a house that was destroyed by the wreck and rescue workers tending to possible injuries a block away.

Railroad workers diverted the 31 cars onto a side track at noon after they had raced nearly 30 miles at speeds sometimes topping 70 mph. At least 11 derailed, unleashing a blizzard of wood, newsprint and fiberboard that destroyed two homes and damaged two others.

"That was the last chance we felt we had to derail them before they went into downtown Los Angeles," Union Pacific Railroad spokesman John Bromley said.

Firefighters sent three children and three adults to hospitals for treatment of minor injuries. Seven other people were treated for minor injuries at the scene, authorities said.

The train cars were derailed in the largely industrial community about 30 minutes after they got loose at a switching yard in Montclair and began rolling downhill.

"We saw the train demolishing and splintering the house. You saw the power lines going down, the sparks. I was in shock," said Jason Mendez, 34.

"It sounded like a plane crash combined with an earthquake," he said.

Firefighters and dogs searched huge piles of debris and news helicopters were asked to back off to allow the use of listening equipment. But no one was believed to be missing.

"It's very amazing," said Los Angeles County Fire Chief Michael Freeman. "What if this happened in the middle of the night with everybody sleeping?"

Many residents of the neighborhood — filled with single-family houses with small yards and front porches — were at work at the time.

Some witnesses stood outside the debris crying. Others watched in silence as rescue workers combed the wreckage.

Luis Carlos Vasquez Jr., 31, was raking in the back yard of one of the homes hit by flying wreckage when he heard the train.

"The sound wasn't right. When I turned around, rocks are flying, there are two box cars in the air."

He said he rushed inside the house to rescue his sister, who had taken refuge in a closet.

"A pair of wheels fell in front of me. The ceiling was coming down. Debris all over the place. I got my sister and carried her out."

It was initially believed that efforts to sidetrack the runaway cars had failed. Bromley later said that railroad employees had ruled out other side tracks along the route because of the risks to property.

"It came down to this was the last spot where we could do it," Bromley said.

At such speed, diverting the cars onto the side track caused them to derail.

The switching yard in Montclair is about 27 miles east of Commerce. No railroad employees were reported injured.