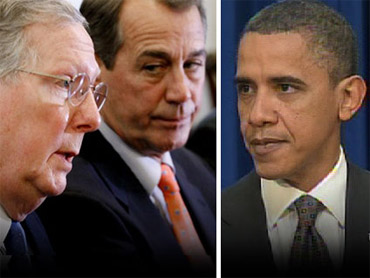 Democrats are playing a game of political chicken with Republicans over extending the Bush-era tax cuts, which expire at the end of the year.

According to the latest CBS News poll, public opinion appears to side with Democrats: 53 percent of those we asked side with the president and say tax cuts should continue for households making just less than $250,000 a year. Only 26 percent believe the tax cuts should be extended to those making more than a quarter-million a year.

But the White House has left open the door for a compromise to extend all the tax cuts for up to three years. In doing so, President Obama may be seeking to smooth the way for other measures designed to boost the nation's sluggish economy. Among them are extending jobless benefits for millions of unemployed workers and continuing tax breaks that were part of Mr. Obama's massive economic recovery package enacted last year.

Without action by Congress, unemployment benefits will run out this month for 2 million people, and several million more will lose them later in the winter.

Earlier Democratic efforts to extend the program into 2011 have been blocked by Republicans demanding offsetting spending cuts.

In addition, Democrats are seeking to extend Obama's Making Work Pay tax credit, which provides tax credits of up to $400 for individuals and $800 for married couples. The tax credit was enacted last year and expires in January.

Democrats also want to extend two other measures: a tuition tax break for college students and a cut for businesses that hire the unemployed.

Sweeping income tax cuts enacted under former President George W. Bush are to expire at the end of the year. If Congress does not act, taxpayers at every income level would be hit with a significant tax increase.

Republicans and some rank-and-file Democrats want to extend the tax cuts for everyone.

Senate Democrats, however, want to publicly stake out their position before agreeing to any compromise, much like their counterparts in the House did Thursday.

On a mostly party-line vote, House Democrats passed President Obama's plan, extending the tax cuts for everyone except high-income earners - a plan that has no chance of passing a Republican filibuster in the Senate.

"Trying to catch my breath so I don't refer to this maneuver going on today as, uh, chicken crap, alright?" he said. "But this is nonsense, alright? The election was one month ago. And to roll this vote out today, it really is just, it's what you think I was going to say anyway."

The prospect of any compromise on tax cuts has some Democrats seething.

"They want the president to stand up and fight," CBS News political analyst John Dickerson said. "There are ads that are going to be running this weekend saying, 'Don't cave, Mr. President!" (See ad below.) They want Barack Obama to make a stand and say, 'Republicans want tax cuts for the wealthy (those who make over $250,000), and Democrats want tax cuts for the middle class.' That's what was behind that symbolic House vote.

"But the president is making a deal, and it doesn't look like it's going the way the liberals want, and they are very angry."

"Early Show" anchor Harry Smith suggested that if a hard-fought compromise is agreed to, it may be "sort of a vision of the future."

"It is a vision of the future although the future is so bleak because, of course, if this goes through it has big deficit implications," said Dickerson.

Alluding to the president's deficit-reduction commission (which is not expected to agree on its own proposals), he said, "We're in the middle of this big question about how much to cut, how much taxes might be increased. And so what liberals are very worried about [is], they see the president buckling, in their view, and think this is just the beginning of a long string of buckles."

Neither bill is expected to pass the Senate because Democrats would need Republican support.

Senate leaders from both parties negotiated Thursday evening on a plan that would have allowed votes Friday on Democratic and Republican proposals. Those talks, however, broke down. Without unanimous consent from all senators, Reid was unable to schedule the votes before Saturday.

The Senate should "stop wasting time on political show-votes and focus on our priorities," said McConnell.

While Senate Republicans released a letter stating , McConnell blamed the Democrats' votes on a tax cut for the middle class as obstructionist: "Every day spent on a political show-vote is another day that Democrats won't be able to debate items that should actually pass."

Reid said, "We believe it's important the American people understand where we stand."