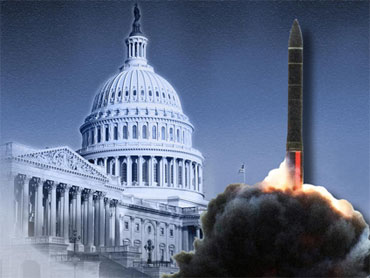 Democrats have moved a step closer toward a crucial U.S. Senate vote on a new arms control treaty with Russia, beating back Republican efforts to alter the accord and setting up a showdown with the Republican Party on President Barack Obama's top foreign policy priority.

The pact with Russia, called New START, would set a limit on both countries' nuclear warhead stockpile at 1,550, down from 2,200, and set up a system to monitor and verify those reductions, reports CBS News congressional correspondent Nancy Cordes.

Inspections ended a year ago when a 1991 treaty expired. President Obama and Russian President Dmitry Medvedev signed the new accord in April, but it needs two-thirds of the Senate to make it law.

The president lobbied senators by telephone Monday to back the treaty, which he has called a national security imperative. A top Senate Democrat conceded "house by house combat" would be needed to win enough GOP votes to prevail.

The White House and Senate Democratic leaders expressed confidence they ultimately will earn the 67 votes necessary for ratification.

Democrats expect to get 57 votes from their caucus, with one senator absent due to cancer surgery on Monday. Four Republican senators, including arms expert Sen. Richard Lugar of Indiana, have said they back the treaty.

The White House has made ratification of the landmark agreement an imperative in the closing days of the postelection Congress, but its hopes for the pact were complicated Sunday as Senate Minority Leader Mitch McConnell said he would oppose the treaty.

"Rushing it right before Christmas strikes me as trying to jam us," said McConnell. "I think that was not the best way to get the support of people like me." Obama wants the Senate to vote before January when Republicans increase their numbers by five, which will dim the outlook for the accord.

On CNN's "State of the Union," McConnell criticized the treaty's verification system and expressed concern that the pact would limit U.S. missile defense options - even though Mr. Obama insisted Saturday that on the system aimed at protecting the United States and its allies from ballistic missile attacks.

Failure to ratify the treaty would be a serious blow to President Obama's foreign policy agenda, and his allies in Congress are pushing hard for passage.

"There is nothing in there that restricts our missile defense system; the president made that crystal clear," said Sen. John Kerry, D-Mass.

On CBS' "Face the Nation" Sunday, Sen. Lindsey Graham, R-S.C., announced that , saying, "We haven't had a serious debate on START. We've been fighting a multiple-front war to try to do every special interest group's bidding in the lame-duck session."

"If you want to have a chance of passing START, you better start over and do it in the next Congress, because this lame duck has been poisoned," Graham told CBS News chief Washington correspondent Bob Schieffer.

Undeterred by McConnell's opposition, Majority Leader Harry Reid announced Sunday night that the Senate would vote Tuesday to end debate on the treaty and move to a final vote.

"It is time to move forward on a treaty that will help reverse nuclear proliferation and make it harder for terrorists to get their hands on a nuclear weapon," Reid said, adding that the debate soon "will come down to a simple choice: you either want to keep nuclear weapons out of the hands of terrorists, or you don't."

A sixth day of debate was scheduled for Monday that included a closed session to discuss intelligence issues.

Speaking on CBS' "The Early Show" this morning, New York Senator Kirsten Gillibrand said the treaty was vital for moving ahead on missile defense, securing loose nukes, and dealing with Iran and its nuclear program.

"This is an issue that we've been working on for months," she said. "Secretary Clinton presented this to the Foreign Relations Committee, the Armed Services Committee months ago. We've had many, many hearings on this issue. It's been very deeply debated. And we are going to have a week on the floor, that's a long time. In the past we've only had two, three, four days on treaties of this nature. So we will have the time to consider it."

Gillibrand was confident that bipartisan support would be there for the treaty. "This is the people's business," she said. "If you want to take anything from the last election it's that the American people want us to work together and get things done and you can't think of a more important issue than national security."

During a rare Sunday session of the Senate, Democrats turned back a Republican amendment to change the treaty, which would have effectively killed it.

Just weeks after President Obama's self-described "shellacking" in the Nov. 2 midterm elections, ratification of the treaty would cap a string of political victories for the White House. Congress endorsed the president's tax compromise with Republicans and voted Saturday to repeal the military's ban on openly gay servicemembers.

In a nod to political sensitivities, Obama held off a celebratory bill signing for legislation ending the ban on openly gay servicemembers in the military until Wednesday. The White House did not want to anger Republican senators opposed to lifting the ban as several could be critical to ratification of the treaty. For example, Sen. John McCain, a Republican, opposed ending the moratorium and the White House is hoping for his vote for the treaty.

While McConnell's opposition did not come as a surprise, it unnerved the treaty's backers, who wondered how hard he would work to defeat the accord. Responding to McConnell, a clearly frustrated Sen. John Kerry, the head of the Foreign Relations Committee, said consideration of the treaty was delayed until after the election at the request of Republicans.

"Having accommodated their interests they now come back and turn around and say `Oh you guys are terrible. You are bringing up this treaty at the last minute,"' Kerry said. "I mean is there no shame ever with respect to the arguments that are made sometimes on the floor of the United States Senate."

Sen. Jon Kyl, the No. 2 Republican in the Senate, also has said he could not support the treaty in its current form.

The Senate launched a sixth day of debate on the treaty on Monday, with a vote slated for Tuesday to move ahead toward a final vote. Lawmakers debated two amendments - one that would increase the number of weapons inspectors and another to raise the limits on the deployed strategic nuclear delivery vehicles from 700 to 720.

The two amendments would alter the treaty, effectively killing the accord as it would send it back to negotiators. Democrats were likely to prevail in defeating the two measures.

Obama and Russian President Dmitry Medvedev signed the accord in April. U.S. weapons inspections ended a year ago with the expiration of a 1991 treaty.

Proponents of the treaty, including much of the military and foreign policy establishment, cite the renewed weapons inspections and say the pact would keep the two biggest nuclear powers on the path to reducing their arsenals. Opponents assert it would restrict missile defense and argue that it has insufficient procedures to verify Russia's adherence.