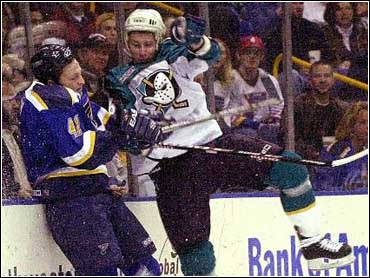 Pavol Demitra picked up the slack for his injured teammates Saturday.

Demitra had his first career hat trick to help St. Louis defeat Anaheim 6-3 on Saturday. The six-goal outburst was impressive because St. Louis was without two of its biggest offensive weapons, Pierre Turgeon and Al MacInnis.

Demitra's goals helped bring the Blues back from a 3-1 deficit to defeat Anaheim for the first time in the last five meetings at Kiel Center. Demitra has 24 goals this season.

"This is a huge two points for us because we trailed most of the game," Demitra said. "We never quit believing and kept with it. This is a big win for us."

Helmer, a defenseman who was recalled from Worcester of the American Hockey League on Friday, beat Anaheim goaltender Guy Hebert at 10:47 of the the period.

"I felt like a little kid who finally gets some candy," Helmer said. "I got a huge monkey off my back and, more importantly, I helped the team win the game."

Demitra got his first of the game at 15:18 of the second period to slice Anaheim's lead to 3-2.

"The goals were nice but it's even better to get the win," Demitra said.

Anaheim coach Craig Hartsburg was disappointed in how his team played when it held the lead.

"We got a two-goal lead and we stopped working and Demitra made us pay," Hartsburg said. "If you stop working, a team like St. Louis will make you pay for not working."

Kariya's goals, which give him 34 on the year, extended his personal goal-scoring streak to three. His second goal came was a power play, marking the seventh game in a row Anaheim had surrendered a power-play goal.

Kariya scored at 13:36 of the first to give Anaheim a 2-1 lead. With St. Louis shorthanded, Kariya banked the puck off Blues defenseman Chris Pronger from behind the net at 10:59 of the second to increase Anaheim's lead to 3-1.

"Paul helped get us a two-goal lead, and when you get a two-goal lead you should work twice as hard," Hartsburg said. "Tonight we didn't work hard when we got the lead, we went the other way."

Teemu Selanne assisted on both of Kariya's goals to extend his scoring streak to 10 games.

Scott Young scored his 17th for St. Louis in the first period. Anaheim's Kip Miller tied the game with a power-play goal at 10:21 of the first.