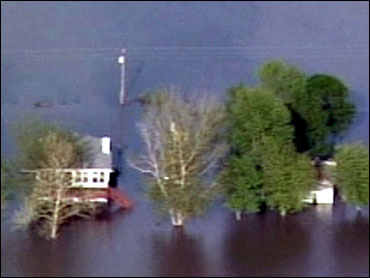 The town of Big Lake, Mo., was living up to its name Wednesday.

Five levees south of Big Lake burst under the pressure of the rain-swollen Missouri River, submerging the small town, reports CBS News correspondent Cynthia Bowers. No deaths were reported, but many homes have been destroyed.

"We've got a lot of water coming in from all directions," said Mark Sitherwood, presiding commissioner of Holt County.

"The town is a loss. At this time, we don't know, but it looks like that's what's going to happen," Sitherwood said.

The Missouri River is at its highest level since the 1993 floods, threatening small towns and even parts of Kansas City and St. Louis, reports CBS News correspondent Peter King.

Most Big Lake residents evacuated Monday but a handful had to be rescued by boat Tuesday, Sitherwood said.

Dana Smith could see his home, through a pair of binoculars.

"I see a lot of flooding, that's for sure. I see my place over there under water and a lot of other peoples'," he told King.

Big Lake is about 95 miles northwest of Kansas City and has a permanent population of 150 and another 150 summer residents. Nearby, the communities of Craig and Fortescue also were threatened, Sitherwood said.

In Agency, a town of about 600 surrounded on three sides by the Platte River, most had already evacuated. The town was hit hard in 1993 in one of the most costly and devastating floods in U.S. history. That flood claimed 48 lives in the Midwest and caused $18 billion in damage.

By midday Tuesday, a few homes were partially submerged, as were nearby roads and a cemetery.

"The Southern Plains will continue to get deluged by flooding downpours ... and more is in store not only today but tomorrow too," says CBS News meteorologist George Cullen.

Amazingly, the torrential rains to blame for this are part of the same system of storms that spawned the F-5 killer tornado that wiped out Greensburg, Kansas, last Friday.

As much as 5 to 8 inches of rain fell on Missouri in a 24-hour period. In Parkville, a town of 5,000, they're giving thanks because, although the Missouri is expected to crest at 38 feet there, about 6 feet above flood stage, that's still 11 feet below the benchmark, the flood of 1993.

"Once we've dealt with the entire flood across the state, we'll begin to evaluate the damage and find out what kind of assistance might be available," Blunt said Tuesday.

River towns across much of Missouri were evacuating low-lying areas Tuesday or seeking help filling and stacking sandbags.

"We're scrambling around here," said Steve Mellis, who was volunteering near the central Missouri town of Easley as residents moved boats and equipment to higher ground.

Two-thirds of the town of Mosby, 20 miles northeast of Kansas City, was already under 2 to 4 feet of water from the overflowing Fishing River, said D.C. Rogers, Clay County director of emergency services. He said the town's 242 residents began evacuating Monday morning. By evening, only one route into the community remained open.

Evacuations were voluntary in several western Missouri counties, but a mandatory evacuation was imposed in Parkville, just across the Missouri River from Kansas City, said Jessica Robinson, a spokeswoman for the governor.

Parts of Missouri, Iowa and Kansas received 4 to 8 inches of rain in a 24-hour period, the National Weather Service said.

Flooding in Oklahoma was blamed for the drowning death of a man whose car was swept off a county road. A Kansas man died when his vehicle overturned in a water-filled ditch near Wichita, Butler County officials said.

Nearly 1,600 people were urged to evacuate the southwest Iowa town of Red Oak on Monday as the Nishnabotna River rose out of its banks.

Levees broke near Willow Creek in the western Iowa town of Missouri Valley, and some residents had to be evacuated by boat Monday, said Mayor Randy McHugh.

Authorities rescued about 500 people Monday from flooding around Topeka, Kan., said Dave Bevans, a spokesman for Shawnee County emergency operations. Officials reported similar evacuations in Saline County, about 100 miles to the west, and flooding forced the evacuation of New Cambria, a town of about 150 people northeast of Salina.

Since the 1993 floods in the Mississippi and Missouri river basins, only two or three other flooding episodes have been comparable to what forecasters are predicting in the next several days, National Weather Service meteorologist Andy Bailey said.

The 1993 flood was caused by melting snow combined with heavy rain over two months. After that, state buyouts of property on flood plains left fewer residences in danger of future floods.

"But make no mistake," Bailey added, "this is a major flood."