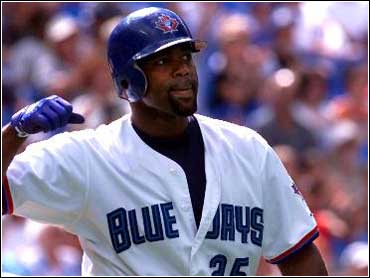 Carlos Delgado hit a two-run homer with one out in the bottom of the ninth inning to give the Toronto Blue Jays an 8-6 win over the Anaheim Angels on Wednesday.

Dave Martinez singled with one out in the ninth off Lou Pote (1-1). Delgado, who went 2-for-5 with four RBIs, then hit a 3-2 pitch for his 35th homer, giving Toronto the win.

Billy Koch (6-2) pitched a perfect ninth to earn the victory.

The Angels blew a 5-3 lead in the seventh before tying the game at 6 in the eighth on catcher Darin Fletcher's error.

The Blue Jays scored three runs in the seventh on Delgado's RBI grounder off starter Scott Schoeneweis, and Tony Batista's two-run homer off Mark Petkovsek. Batista has 35 homers, including 17 in the seventh inning or later.

Toronto took a 2-0 lead in the first on Delgado's RBI single, and Batista's run-scoring double.

Glaus homered for Anaheim in the second to make it 2-1, but Jose Cruz hit a solo shot in the third to tie it for Toronto.

Erstad homered in the fifth, and the Angels scored two runs in the sixth on Glaus' RBI single and Kennedy's sacrifice fly.

Pinch-hitter Scott Spiezio's bloop RBI single in the seventh made it 5-3.