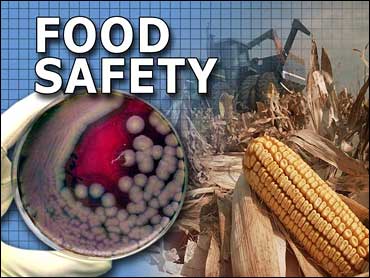 One of five people hospitalized with complications from a hepatitis A outbreak that has infected more than 185 people died Friday night, hospital officials said.

The victim died less than a week after Pennsylvania health officials announced cases of the infectious liver disease apparently linked to a Chi-Chi's Restaurant at the Beaver Valley Mall, about 25 miles northwest of Pittsburgh.

Susan Manko, a spokeswoman for UPMC Hospital in Pittsburgh, declined to release further information about the patient.

As of Friday, state health officials had confirmed more than 185 cases of the disease, 158 affecting residents of Pennsylvania. There are also 21 victims from Ohio, four from West Virginia, one from Florida and one from South Carolina, said Health Department spokeswoman Jessica Seiders.

Unlike the more serious variants, hepatitis B and C, which are generally spread by intravenous drug use or risky sexual behaviors, hepatitis A is spread by eating something contaminated with the feces of someone with hepatitis A, according to the Centers for Disease Control and Prevention. Food-borne outbreaks generally involve fresh vegetables or other uncooked foods handled by a contaminated person, but the disease is relatively rare.

Symptoms of hepatitis A include fever, nausea, diarrhea, jaundice, fatigue, abdominal pain and loss of appetite. The disease usually clears up in about two months, but it can cause serious complications for those who already have liver problems or immune deficiencies.

At least four people remained hospitalized Friday, some in critical condition, according to the University of Pittsburgh Medical Center.

On Friday, Chi-Chi's said it regretted the outbreak and is working with state health officials to pinpoint the cause. The restaurant has remained closed.

"We have clear and long-standing policies that prohibit employees from working while sick. Several employees may have worked, not knowing they had been infected or could pass on the infection to others," the company said in a statement.

No specific cause of the disease has been located, but officials don't believe anyone purposely contaminated food or the restaurant, Health Department spokesman Richard McGarvey said.

More than 5,200 people have received free antibody injections this week to help them ward off the disease. Because the disease takes about two weeks to incubate, the injections won't help those who may have been infected before Oct. 22.

The Health Department extended its clinics for people seeking antibody injections to Saturday and Monday because of the growing number of possible victims, the department said.

Meanwhile, lawsuits were filed Friday on behalf of some people who say they were victims of a growing hepatitis A outbreak.

"We have been contacted by at least a dozen people who contracted hepatitis A after eating at Chi-Chi's, and we are filing this lawsuit because our clients deserve compensation," said William Marler, managing partner of Marler Clark, a Seattle law firm.

Robert Peirce, a Pittsburgh attorney, said he also was filing suit on behalf of a couple and their child and said he has been contacted by about 20 other people.

Several other lawyers and firms said they have been contacted by people who reported having become sick after eating at the restaurant.