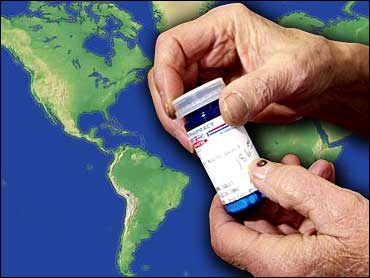 The most emotionally charged problem in the World Trade Organization appeared near solution after key countries agreed on the wording of a deal that would allow poor nations to seek alternatives to expensive patented drugs for diseases like HIV/AIDS and malaria.

Negotiators who have struggled with the issue for almost two years are expected to adopt Thursday an agreement that was drawn up last December but rejected by the United States, plus an accompanying statement designed to calm the fears of the big pharmaceutical companies.

"I hope we will seize the moment," said Canadian WTO Ambassador Sergio Marchi, who last December — as chairman of the WTO's general council — reluctantly had to admit temporary defeat faced with unflinching U.S. refusal.

Under WTO rules, countries facing public health crises have the right to override patents on vital drugs and order copies from cheaper, generic suppliers. However, until now they could only order from domestic producers — useless for the huge majority of developing countries that have no domestic pharmaceutical industry.

A critic of the big pharmaceutical companies, Congressman Tom Allen, D-Maine, told CBS News Correspondent Dan Raviv: "The U.S has been standing alone with the pharmaceutical industry against the demands of basically the rest of the world to make a shift in policy, and now at last it appears the Bush administration is doing that. I think it's a case of the administration finally facing the reality that the rest of the world would not accept the position that we have been taking since last December."

U.S. pharmaceutical research companies were concerned that a deal to allow countries to import generic drugs would be abused by generics manufacturers and could also lead to drugs being smuggled back into rich countries.

However, all sides have accepted that the problem has to be settled for humanitarian reasons and because of the damage it has done to the public perception of the WTO — the 146-nation body that sets rules on international trade.

Failure to reach agreement this week also would throw a huge cloud over a crucial meeting of WTO ministers in Cancun, Mexico, in less than two weeks' time, and would jeopardize the chance agreement there on other issues as part of the current "round" of trade liberalization negotiations.

On Wednesday, a core group of negotiators from the United States, Brazil, India, Kenya and South Africa finally agreed on the wording of the statement.

The document was presented to all members late Wednesday. Officials said there were questions and many diplomats said they needed to speak to their governments, but no country signaled that it opposed the agreement.

They will meet again Thursday afternoon to try to approve it. The meeting could run late into the night, as diplomats have asked for an adjournment early evening to allow them to attend a memorial service for slain U.N. Iraq envoy Sergio Vieira de Mello.

The proposed statement says that rules allowing countries to override patents "should be used in good faith to protect public health ... not be an instrument to pursue industrial or commercial policy objectives."

It calls for special measures to prevent drugs being smuggled back to rich country markets, including special packaging or different colored tablets.

Developed countries would agree not to make use of the provision.

But the development aid group Oxfam said the deal would be a "disaster."

"This would be a travesty of an agreement that would no doubt be presented as wonderful thing for development," said Oxfam's Head of Advocacy in Geneva, Celine Charveriat. "The text contains so much red tape and so many obstacles that if it were accepted developing countries would still struggle to get access to cheap medicines and thousands of people would continue to die unnecessarily."