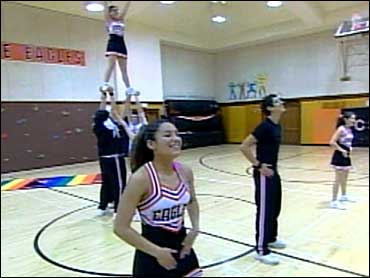 It is hard to imagine the excitement of a sporting event without the screams of cheerleaders and the roar of the crowd. But silence is what you'll find at a special high school in California. The Early Show Correspondent Melinda Murphy reports on a squad where most cheerleaders are totally deaf.

Their cheers may be silent, but their message is loud and clear.

Cheerleader Erin Ross says, "We want to prove to people that we can do it. Deaf people can do anything except hear. So why would something like cheerleading stop you?"

And not just do it, but do it well, earning the respect of both students and staff at the California School For The Deaf. The school is well-known for its academics, but cheerleading, who knew?

They build the crowd's excitement by signing words like "defense," using written signs and even leading yells.

While the school's cheerleaders have won regional trophies in the past, the current squad has accomplished what no other deaf school has ever done before: qualifying for The United Spirit Association's national competition.

"They were jumping up and down and screaming and I cried like a baby," says coach Farrah Nolan.

But the road to nationals hasn't been an easy one.

Erin notes, "Hearing kids can learn the musical piece and they follow the beat of the music. And we don't have that. But we do have two or three hard of hearing kids on our team. They sort of follow the music and they know the rhythm. And then we follow them at first."

Even more amazing? Only a few of the kids had ever been on a cheerleading squad before this season.

Nolan notes, "I think it's very empowering to our students and showing that, 'Hey, we made this goal. And we decided we wanted to do this.' And we are. And we're showing that we can, regardless of that we're deaf."

The coach herself only began cheerleading two years ago, but now the squad is on a mission.

Cheerleader Leala Holcomb says, "We feel like the whole world is watching us. We want to do well, and we hope to win the championship so we can show that deaf people can do it."

Besides attending school and working on projects like the yearbook, students like Leala and Erin practice cheerleading about 10 hours a week.

Leala says it's all worth it.

"I've wanted to be a cheerleader since I was a little girl," Leala says, "It's one of the reasons why I look forward to getting up out of bed and coming to school during the day, because I get to go to cheerleading practice. I don't know that it's changed my life, but it has given me a positive outlook."

And on Saturday night, their dream became a reality when the California School for the Deaf competed with the best of the best.

The warm up was a little rough, and one of the girls fell during practice. But when it was their turn to take the stage, it was magic.

They nailed their routine and they knew it.

"I'm extremely proud of them. They did a fantastic job," Nolan says, "I could not have hoped for anything better, and the audience was fantastic, they gave them a standing ovation. It was amazing."

In the end, there would be no trophy. But still, it was a huge accomplishment.

Leala says, "Definitely worth it. All the hard work paid off, it really did."