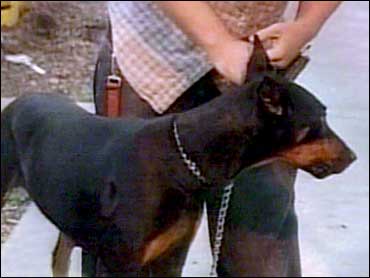 On the night of Sept. 10, Dane Corell of Medford, N.J., made a distraught call after discovering the body of his longtime girlfriend, 66-year-old Valerie deSwart.

She died in her home by what was first thought to be an act of a violent criminal. Later, The Early Show resident veterinarian Debbye Turner reports, the authorities determined the family pet killed deSwart.

"It was the dog that had killed her and literally had attacked her from the back and bitten through her skull multiple times, and she bled to death," says Fran Hartman, the deSwarts' attorney.

Valerie deSwart left behind two children and a grandson. A second grandson was born four days after her death.

The killer dog, Ignat, was a three-year-old Doberman pinscher that deSwart had adopted 10 days earlier. She had logged on to Petfinder.com, a Web site which helps prospective owners find shelter dogs in their area.

There was a listing for a Doberman pinscher, which was located at the Associated Humane Societies Shelter in Newark, N.J. DeSwart thought she'd found exactly what she had been looking for, but there was a deadly twist.

"Unbeknownst to Valerie deSwart, this dog had been turned in to the shelter to be put down or killed, because it had attacked its prior owner to the point that she had 46 stitches in her face, neck, and back as a result of the attack," Hartman says.

According to deSwart's family, the Petfinder.com listing didn't include any of the warning symbols that indicate if a dog is aggressive toward people or other pets. And, they say, nobody at Associated Humane Societies warned her about Ignat's past.

DeSwart apparently didn't know about this, either. A scathing report issued this past March by the New Jersey Commission of Investigation on Associated Humane Societies depicted the association as a troubled organization.

A good shelter will let you bring a pet back within a certain period of time. It is a good idea to adopt only from a shelter that has a return policy.