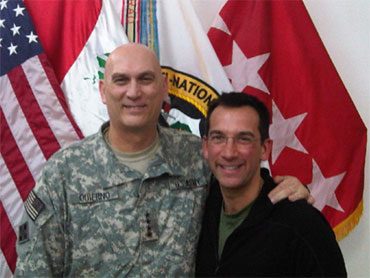 As Americans celebrate the holidays with their families, the troops overseas aren't so fortunate.

So, to give the men and women serving abroad a taste of home and the holidays, a non-profit group of entertainers called "Stars for Stripes" is traveling to them. The group focuses on performing in some of the most remote and forward-operating bases in the war zones.

This is Price's sixth tour to entertain the troops doing stand-up comedy. This year, Price will spend a week in Iraq, although in years past he's traveled to Afghanistan, as well.

Learn more about "Stars for Stripes"

With "Stars for Stripes," Price has performed before 6,000 troops in Baghdad, and as few as 20 on the Haditha Dam.

Price has traveled with legendary country singer Charlie Daniels and, for the past three years, with members of the Groundlings Comedy in Los Angeles.