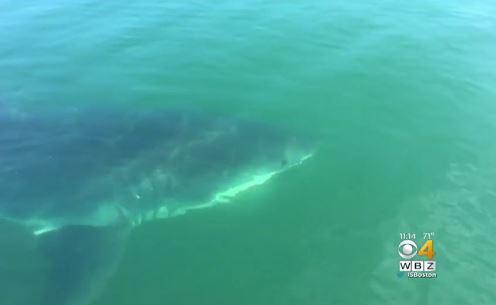 PROVINCETOWN, Mass. – An 8-year-old boy and his dad had a close encounter with a great white shark last weekend, CBS Boston reported.

Jim Gibbons and his son, Jack, were fishing off of Race Point Beach in Provincetown when a shark swam up to their boat. They proceeded to videotape the shark with a cell phone.

“When I saw it coming towards me, its eyes were just pointed to the side so you couldn’t see any of its eyes. But you could see it’s white and just the nose was coming right at you,” Jack said.

The Duxbury father and son estimated the shark to be about 20 feet long and say it circled their boat for roughly 15 minutes.

Jim said he grew nervous as the shark got closer and closer to the boat.

“He’s hungry! And he thinks we’re dinner,” he can be heard saying in the video.

In the last few days, there have been several other shark sightings off of Race Point Beach.