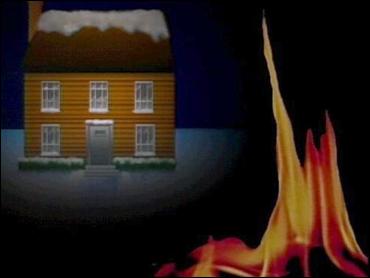 On a cold night in Philadelphia last month, Ronald Evans put on a pair of earmuffs, climbed into a bed piled high with blankets and spent hours shivering in a home without heat.

"I never want to go through that again. It got so cold, so fast," said the 66-year-old retired school custodian.

Evans had fallen $225 behind on his electric bill and the utility had turned off the electricity. But the power was turned on the next day after Evans applied for and received an emergency government grant that paid off his delinquent bill.

Charities, utilities and government agencies across the country are reporting a surge in the number of people asking for help paying their heating bills, even as the Bush administration proposes a $300 million cut in the nation's biggest source of home heating aid.

The White House has requested $1.4 billion for the Low Income Home Energy Assistance Program, compared with $1.7 billion last year. Congress hasn't decided whether to adopt the cut, but critics said the proposal comes at the worst possible time.

Cutting the money could affect more than 500,000 people who rely on aid to pay utility bills, according to the National Energy Assistance Director's Association, which represents state officials who administer LIHEAP grants.

"They will either shut their program early, when they run out of money, or cut benefits," spokesman Mark Wolfe said. "It is colder than last year. Unemployment is higher ... We are starting to hear from some states that their caseloads are going up."

In Albany County, N.Y., applications for heating assistance grants are up 60 percent, officials said. In Pittsburgh, where layoffs at US Airways have hammered the economy, the Salvation Army said it has already spent 70 percent of its annual $10,000 home heating assistance budget.

Philadelphia Gas Works said 10,000 city customers whose service was shut off this summer because of delinquent accounts remained without heat or hot water in early December. Another 1,100 customers were without electricity and natural gas service in southeastern Pennsylvania.

The Heat and Warmth Fund, a Michigan group that helps low-income families with heating bills, has shelled out $345,500 in heating grants in November and December - nearly twice the total for the same period last year - and officials aren't sure if they'll have enough money for the rest of the winter.

The federal Administration for Children and Families said last year's LIHEAP program had a surplus of nearly $300 million, in part because of a warmer-than-normal winter, and that some of that money could be tapped if funds run short.

States are already planning their own cuts, according to the energy assistance directors' group.

Connecticut would tighten eligibility rules for LIHEAP aid, cutting an estimated 10,700 households. Illinois would cut off 34,700 families, the group said, while Indiana would slash 20,350. Tennessee officials said they would also cut the number of households served if funding fell short.

Other states are planning to trim benefits, Wolfe said. Vermont would slash its average heating grant from $525 to $400.

States set their own rules for the federal program. In Pennsylvania this year, a family of four would have to have an annual income of no more than $24,435 to qualify. A person living alone must earn no more than $11,961.

Evans said the LIHEAP grant he received through Philadelphia's Utility Emergency Services Fund was "a gift from heaven."

"On my block, you have a lot of people on retirement. They are on a fixed income. Their taxes are going up. And it's either you do without your food, don't pay your taxes, or fall behind on your payments," he said. "The economy is bad, and there are a lot of people who need help."