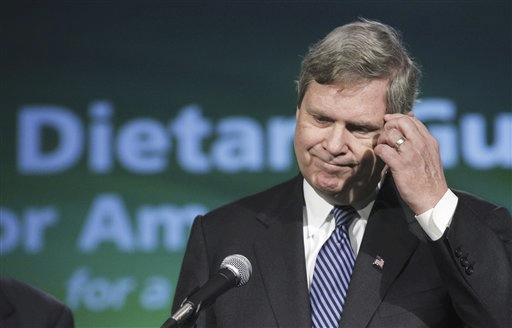 WASHINGTON (AP) - You should eat less salt, the government says. A lot less.

It won't be easy. Consumers will need help from food companies if they are going to meet the government's ambitious new goals, announced Monday, for half of Americans to reduce the amount of salt they eat by more than half. Most salt intake doesn't come from the shaker on the table; it's hidden in foods such as breads, chicken and pasta.

Many of the rest of us need to cut back on sodium, too, the government said. And we still need to just plain eat less, especially fats.

The new dietary guidelines, issued every five years by the Agriculture and Health and Human Services departments, are telling people who are 51 and older, African-American or suffering from high blood pressure, diabetes or chronic kidney disease to cut the amount of sodium they eat daily to little more than half a teaspoon.

That group includes about half of the population and those who are most at risk of having higher blood pressure due to the amount of salt they eat.

For everyone else, the government continues to recommend about a teaspoon a day - 2,300 milligrams - or about one-third less than the average person usually consumes.

A number of major food makers have announced plans during the past few years to cut sodium in their products as pressure from health advocates, consumers and regulators has built.

Kraft Foods Inc., ConAgra Foods Inc., General Mills Inc., Heinz Co., Campbell Soup Co. and Bumble Bee Foods Inc. are some of the companies that have committed to lowering sodium levels. But it's often a multiyear process to dial down the sodium, largely so consumers do not detect the changes in taste.

It's unclear if those incremental changes will be able to cut enough to satisfy the new guidelines. The Food and Drug Administration has said it will pressure companies to take voluntary action before it moves to regulate salt consumption.

Melissa Musicker, director of nutrition and health policy at the Grocery Manufacturers Association, which represents the nation's largest food companies, says companies will reduce sodium as consumers increasingly demand it. She said that in past years consumers may have avoided products labeled low in sodium. Now, consumers are interested in them.

"They are specifically purchasing those products and they are enjoying them," she said. "Companies are in the business of giving consumers what they are looking for."

Margo Wootan, director of nutrition policy at the Center for Science in the Public Interest, says the heightened interest in the dangers of too much sodium could help somewhat. But she believes the FDA will have to take action for the companies to reduce enough salt to matter.

"The companies are only going to do it if there's a really strong push," she said.

The salt industry is fighting back. Lori Roman, president of The Salt Institute, an association of salt producers including Morton and Cargill, said the guidelines make the government into the "food police" and are "made up out of thin air."

She said salt companies aren't worried about people's reactions, however.

"If they don't get it on one food they're going to get it in another food, or they will seek out the salt shaker," she said.

Some cities and states have already moved to try and ensure that doesn't happen. New York City has launched a campaign with the goal of cutting salt consumption by at least 20 percent in five years. That's modeled on a plan in Britain that set voluntary salt reduction targets for 85 categories of processed foods. At least 18 states and the District of Columbia have set portion limits for sodium in school meals and snacks beyond federal standards, according to the National Conference of State Legislatures.

Consumers still have some control. To reduce the risk of disease from high sodium intake, the guidelines say people should:

- Use little or no salt when cooking or eating.

- Eat more fresh or home-prepared foods and fewer processed foods, so they know exactly what they are eating.

- Ask that salt not be added to foods at restaurants.

- Gradually reduce sodium intake over time to get used to the taste.

The government promotes these guidelines to consumers by using a pyramid. It doesn't specify recommended amounts of foods but directs people to an Agriculture Department website that details the guidelines. That replaced an old pyramid with more detailed specifications after surveys showed that few people followed it.

Agriculture Secretary Tom Vilsack said his department may come out with a new icon, but that won't be for a few more months. For now, the government wants consumers to focus on the guidelines themselves.

He says the recommendations - coupled with efforts from industry and other government campaigns for healthful eating, such as first lady Michelle Obama's "Let's Move" initiative - should bring about some change in the country's diet.

"I don't think it necessarily has to take a generation or two to see some progress," he said.