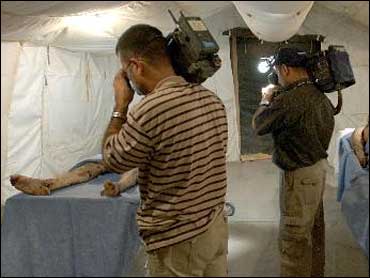 
They used to say you knew you were going to have a bad day when you opened the door and found Mike Wallace and the "60 Minutes" crew on your doorstep, which helps us to understand how Zaidan Nasari felt when he opened his door in Baghdad and found Saddam's two sons standing there.

'They asked to stay in my house and I could not refuse them,' he told a friend. 'It was a disaster for me.' Well, he had that right, but he only lost a house. Saddam's sons lost their lives when a tipster told American troops where to find them.

Were American news outlets right to show the brothers' bodies? I think so. These men were monsters and the Iraqis have been lied to so long they won't believe much unless they see it.

Washington Post writer Tom Shales likened it to how the people of Oz couldn't believe the wicked witch was really dead, and remembered that the Munchkin coroner had to reassure them that the witch was not just merely dead, but truly and sincerely dead.

Helping the Iraqi people to understand the Hussein brothers are really dead is dirty business. But the quicker they believe it, the quicker we'll find Saddam, and that can only save American lives.

Here's the important thing to know: The tipster who turned them in did it for the money, which is why we must now make sure that Saddam's old henchmen know that the reward money is for real and that there will be more for whoever fingers him. These are criminals and criminals can be bought.

I'm not suggesting we call in Ed McMahon to preside over a public ceremony, but I would let the cameras record it when we pay off the tipster who ratted on the sons, and I'd pay him in cash, even if he had to wear a mask. And he may want to.