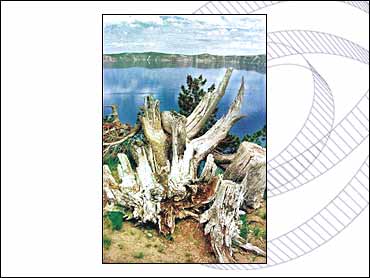 Scientists soon will be using deep-sea technology to map Crater Lake, hoping to unlock the secrets of a volcano that formed it.

On Monday, a boat equipped with echo-sounding equipment will start sending its pings into the cobalt-blue waters of the nation's deepest and clearest lake, which formed after 12,000-foot Mount Mazama erupted 7,700 years ago.

The $200,000 effort is the first attempt to map the lake since 1959. It is a partnership between the National Park Service, which is paying most of the bill, the U.S. Geological Survey, which is overseeing the mapping, and the University of New Hampshire, which is leasing equipment from C&C Technologies Inc. of Lafayette, La.

The mapping will primarily focus on discovery of geothermal vents on the lake floor, 1,932 feet below the surface at its deepest point. These are factors in the lake's chemistry and ecology. It will also try to get a better picture of the lake floor to help understand the volcanic eruption and formation of the lake.

The initial soundings of Crater Lake in the late 1800s used piano wire and a lead weight to measure depths. In 1959, echo-sounding equipment measured the depth at 4,000 points around the lake. Besides the cinder cone that forms Wizard Island, the soundings show an underwater cone on the lake floor.

In 1988, scientists in a tiny submarine surveyed about 2 percent of the lake floor and discovered hydrothermal vents with bacterial mats and tiny mites living around them. The discoveries were used to fend off development of geothermal energy outside the park.

The latest mapping effort will generate data points in the tens of millions that are accurate to within 50 centimeters, said James Gardner, chief of Pacific seafloor mapping for USGS in Menlo Park, Calif.