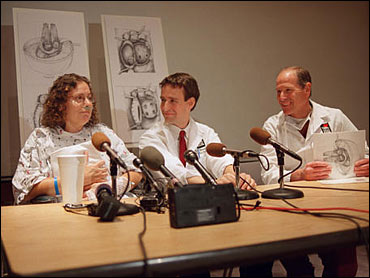 To remove a tumor and keep it from coming back, surgeons removed a woman's heart and rebuilt its upper chambers with cow and human tissue in what doctors are calling a first-of-its-kind operation.

"The interesting part about this is there are a lot of patients with heart cancers that we frankly have given up on, or have been unsuccessful in treating, with even aggressive removal of tissue," Griffith said Thursday.

A heart transplant may have cured the problem, but the surgeons said it is better for patients to keep their own hearts. That is because of the possibility of organ rejection, the need to take anti-rejection drugs, and a 50 percent average 10-year survival rate for heart transplant recipients.

It was the fourth time 46-year-old Sandra Lanier, of Ware, Mass., had open heart surgery and, hopefully, the last.

"It was rough, but, hey, I made it through," Lanier said, sitting in a wheelchair at the University of Maryland Medical Center.

She could be discharged within days, less than two weeks after the 12-hour operation, Gammie said. Lanier's surgeons expect she will make a full recovery.

Lanier suffered from a rare form of a non-cancerous tumor called myxoma in her left atrium.

Lanier has been diagnosed with a syndrome called "Carney Complex," a hereditary disorder that involves recurrent atrial myxomas. Researchers have identified only about 400 people in the world with the illness.

This time, Gammie decided to try the procedure.

"It was certainly a more radical approach, and we felt that it was worth the slightly additional risk because each time we go back with a conventional operation it gets more and more dangerous," Gammie said.

The tumor was deep in Lanier's chest, so the surgeons removed her heart for several hours, as if they were doing a heart transplant. During that time, Lanier was connected to a heart-lung machine.

Her heart was placed in an ice bath, where it was worked on for about five and a half hours before being sewed back into her chest.

During the operation, Gammie took out the remaining atrial tissue and used cow tissue to replace the back portion of the atria and line up the pulmonary veins so they could be reattached to the heart.

There is still a risk of blood clots in the rebuilt atria, and Lanier will take blood thinners to reduce the risk. The surgeons also implanted a permanent pacemaker to maintain adequate heartbeat.

Griffith said last week's surgery built on his experience with a similar procedure in Pittsburgh three years ago, when he removed a woman's left atrium and created a new one using cow tissue.